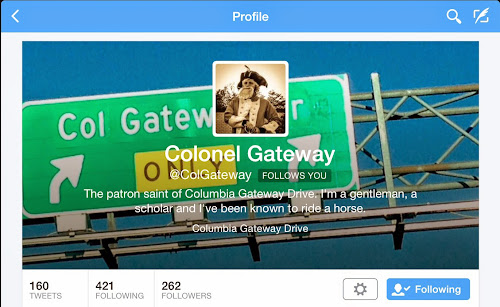 Since sometime in September of 2014, as far as I can tell, Colonel Gateway has been maintaining a presence on Twitter and entertaining those of us in the Bubble who may have originally thought that the "Col" on the Columbia Gateway sign stood for Colonel. It's a delightful parody account. He's chatty, he's fun, and he interacts with his followers. Here's a closeup photo: 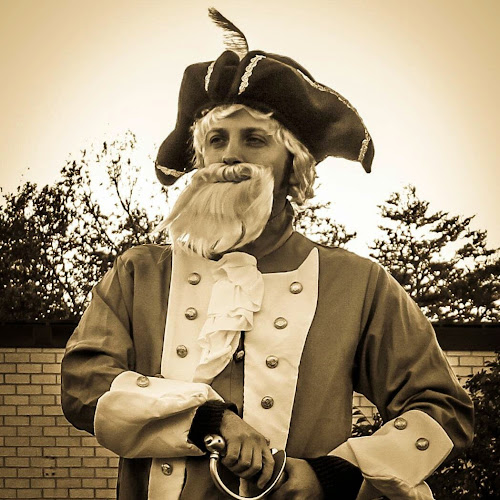 Columbia is an odd duck in the world of municipalities. In fact, it isn't one. It's an overgrown homeowners association. We don't have our own TV station, radio station, or even a truly local newspaper. But now we have Colonel Gateway. He's our odd duck . He tweets about the traffic, the weather, the flocks of Canada geese, a good place to get lunch. Colonel Gateway: the hyperlocal hero.

So, when I saw this video about the Gateway area, which features the Colonel, I was pretty tickled. The Official Anthem for Gateway Drive? Produced by ADG Creative, it's quirky and funny. Maybe Julia Louis-Dreyfuss would have enjoyed her time here more had she gotten to hang out with Colonel Gateway and the other folks in this video.

Oh. Wait. Could it be? Is Colonel Gateway merely a creation of ADG Creative as a part of their campaign to promote Gateway? Is he nothing but a commercially-owned advertising mascot?

Noooooo! Say it ain't so, Colonel! I want to believe that you love us for who we really are, not just because you get paid to. Ah, well. Everyone needs to eat. Even the Colonel.

Posted with Blogsy
Posted by Julia A. McCready at 5:26 AM