One inch. Did you know that one inch can negatively impact your educational experience?

How could that be?

On Wednesday of this last week my daughter was on her way to her locker and she was flagged down by two administrators because,
"While she was walking down the hall, her shirt rode up, exposing about one inch of abdomen."
This is what she was wearing. 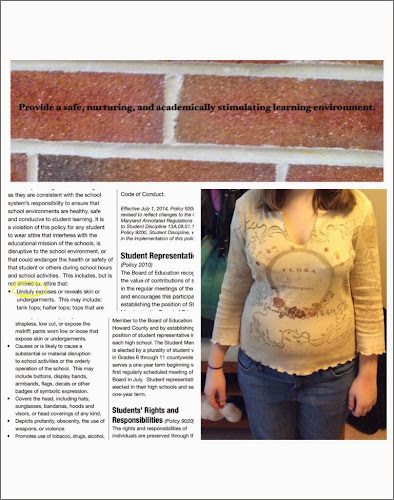 At first she didn't even know why she was being stopped. She feared it was about a forgotten hall pass. Then she thought maybe her shirt was cut too low? (She asked. It wasn't.) When she finally understood what the problem was, she pulled her pants up and her shirt down and thought she was done. No, somehow she wasn't. Clearly, she was told, that shirt would ride up again, so she needed to cover up. Did she have something in her locker? She didn't.
So she was instructed to go to the office and pick up a specially designated article of clothing so she could cover up that inch. That truly impossible inch of skin which rendered her in violation of the dress code and made it okay for the administrators to tell my daughter that her clothing was "inappropriate."
The dress code of the Howard County Schools prohibits clothing which "unduly exposes or reveals skin or undergarments." Wearing a long-sleeved shirt in the winter which accidentally rides up as you walk down the hallway is an inconvenience or an annoyance.
It is not an undue exposure, or a flagrant disobedience, or a rebellious act. It is a shirt riding up.

It is NOT a violation of the dress code.

My husband and I met with the administrators and asked them to look at the language of the dress code. We were met with defensiveness and inflexibility. When we suggested that the school and the PTSA a create an all-stakeholders group to discuss the interpretation and enforcement of the dress code within our school community, we were refused. We were shown archived video footage which proved nothing other than how incredibly uncomfortable our daughter felt during this incident. You can see her body language just crumble.

We have had a growing sense of dismay of how the dress code has been applied at the school. More often than not, it is girls who are shamed. The focus during lectures on the dress code is most often on girls -- what parts of their bodies are or aren't school-approved.

What kind of a message are we sending these young women in a place which is supposed to be a safe environment for learning and academic growth?
"Your body is inappropriate. You create distractions--

Their learning is more important than your learning,

just by virtue of being female, you invite others to judge your appearance."

It was our intent to open a dialogue with the school on this issue. What are the implications when school dress codes are implemented in such a lopsided way? One of the goals of our schools is to create safe and welcoming environments. This kind of punitive focus on girls' appearance runs completely counter to that, and it sets a bad example for boys as well as girls.
If our young women are being taught that even in what should be a safe place of learning their bodies are subject to random policing and casual shaming, what are our young men being taught?

Yes, our young people need boundaries and guidance. But during the middle school years they also need to know adults will be in their corner, stick up for them, empower them to challenge themselves and learn self-discipline. When a representative of the school decides that the most important thing about my daughter is her shirt, the message that is communicated speaks to shame, judgement, devaluing a young person whose life should be brimming with possibility.

Posted with Blogsy
Posted by Julia A. McCready at 4:01 AM