HoCoHoller on the Home Front

I'm embarrassed to say I woke myself up snoring this morning. It was early, around five am. I didn't want to run the risk of waking up my husband, so I went downstairs to sleep on the couch. Once I got downstairs it was chilly, so I grabbed a couple of the throw blankets we keep for just such occasions, got comfy and dozed off. When I eventually woke up at eight, I toddled on into the kitchen, made coffee, and brought it upstairs.

Well, it's a big deal if you're homeless. None of that would be possible if I didn't have a place to call home.

Last night my church, Abiding Savior Lutheran, became another one of the growing number of congregations to host a chili cook-off to support Bridges to Housing Stability. The plan for a chili cook-off is simple: you need a variety of cooks, and number of willing tasters. The winner is chosen as tasters "tip" their favorites--bringing a lot of single dollar bills is highly recommended. Our small but mighty church raised $300.00 to help end homelessness in Howard County. 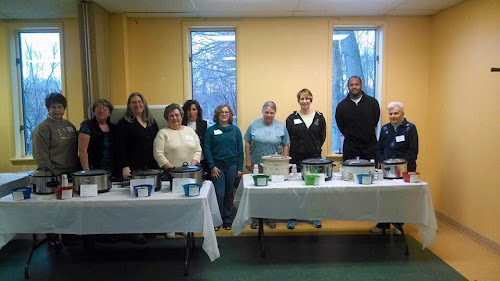 The winner, Mr. Howard Duncan, with a few of his able competitors: 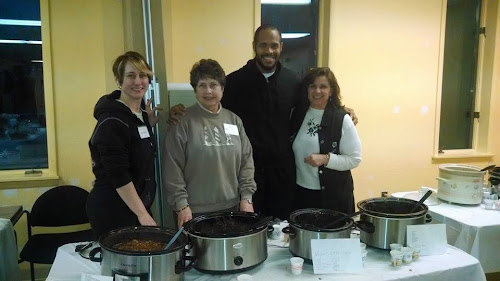 The representative from Bridges to Housing Stability who attended the cook-off began with this simple statement:
No one should experience homelessness – no one should be without a safe, stable place to call home. Everyone deserves a home in Howard County.
She gave us some numbers about homelessness in our county. Perhaps it's an overall sense of affluence and pride in our own accomplishments that mask such truly devastating pockets of suffering. A number I found particularly heartbreaking is that over five hundred children in the Howard County Schools system have been identified as homeless.
The chili cook-off, which started with one congregation and has now grown to eighteen, will conclude on March 8th when all of the preliminary winners will meet at the Church of the Resurrection in Ellicott City to battle it out for the right to claim The Golden Ladle in the Fifth Annual "Hotter Than Thou" Chili Cook-Off. If you like chili and want to support this wonderful cause, mark your calendar now and stock up on single dollar bills. There's no entry fee, you'll simply taste and tip to show your approval.
A heartfelt HoCoHoller to the folks at Bridges to Housing Stability, to all the churches participating in this year's chili cook-off, and to Abiding Savior Lutheran Church for a tasty evening of fellowship, food, and fun.

Posted with Blogsy
Posted by Julia A. McCready at 6:44 AM