So, imagine this is you. Your family. Your spouse.

"Okay I knew it was a matter of time…we are an average, patriotic family with 2 kids living in the River Hill neighborhood… I am a practical girl from the Midwest sometimes intrigued and entertained by the HOCO mentality…well my husband has been dieting and working out by walking around the neighborhood, sometimes he wears a Gold's Gym workout/weight vest and today on his walk on this beautiful day…a person called 911 and then 3 cops cars stopped my husband on his walk after he was reported as a probable terrorist/menace to society and may have a gun -- they made him raise his hands and they asked if he had a gun….Can't wait for the responses on this one ! by the way…the police could not have been nicer!"

I had to do an Internet search on the vest. It looks like this. 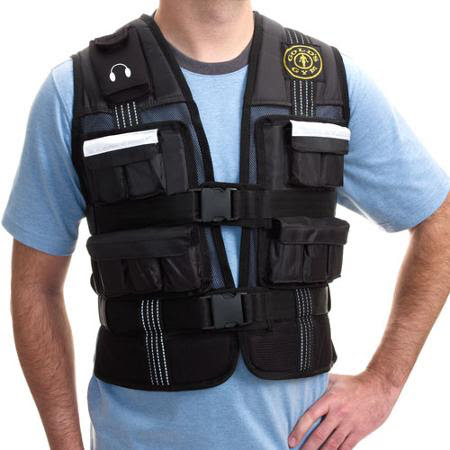 Recently HoCoRudkus wrote a blog post on "If you see something, say something." The post addresses the actions of school officials who reported Ahmed Mohamed, the 14 year old boy who built a clock and brought it to school to show his teacher. Has "see something, say something" become so ingrained that we feel we must do this without first applying some good sense? (I think that's what HoCoRudkus is asking here.)

The discussion on Clarksville Happenings was fascinating, and all-around civil. Was it just crazy and over-the-top to call the police? Is that particular vest a little scary-looking in light of the world we live in, post 9/11? Are people in Howard County a little too busy-body-ish for their own good?

One woman commented, "My solution: everyone should go outside several times a day at different times, say hello to everyone that walks by and get to know your neighbor."

Know your neighbor. That would go a long way in ameliorating many of the generalized, non-specific fears we have in our immediate neighborhoods. I heartily endorse this. So that strange guy running by your house is not a strange guy. This doesn't, however, address how we treat someone we don't know who hapoens to be passing through our neighborhood.

"Our eldest was stopped by police walking through one community back to ours. He was told he wasn't allowed to walk! But wasn't offered a lift home. Crazy you can't even use your legs to get about and it's seen as an aberration if you do!"

Running while wearing a strange vest. Walking in a neighborhood you "don't belong in". Worshipping a "foreign" religion. What constitutes a reason for us to fear?