Some love-thy-neighbor types took to the streets yesterday to defend the worship space at Dar Al-Taqwa Mosque on Route 108 in Ellicott City. You can read more about this through posts on the "Celebrating Columbia and its Future" page on Facebook.

Briefly: a man named Mike White, not a Howard County resident, called for a rally against Islam to be held Saturday, October 10th, at the site of the Dar Al-Taqwa Mosque. You can see the kind of hatred his group is spewing here. (Don't say I didn't warn you.)

Once word got out on social media, people from Columbia and Howard County responded with a plan of action to support our Muslim neighbors and reject hatred in our community. They made a commitment and they showed up armed with goodwill, resolve, and signs like this. (Photo credit: Robin Procida.) 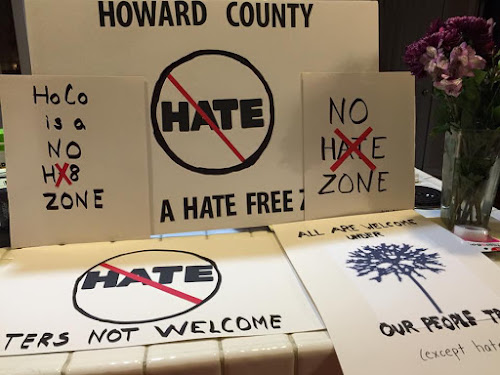 The rally against Islam was a bust. "BTW, Mike White, the rally organizer did show up but when he realized no one else was there to join him he drove away." (Robin Procida) On the other hand, members of the mosque reached out to the positive protesters with donuts, pizza, and words of friendship and thanks.
I have read over and over again, in response to the news of the purported anti-Islam rally: This is not Columbia. This is not Howard County. This is not who we are.
Yesterday, at the place "where Columbia and Howard County intersect", some brave folks turned up to say: This is who we are.
In the face of that support and acceptance, the haters came off looking rather puny. And I'd like to say that's the end of it. But we really don't know.
Hatred may slink away on one occasion only to slither back on another. I think we all need to be ready to stand up for our neigbors. We may yet be needed in this fight.
Posted by Julia A. McCready at 5:44 AM