Have you seen photos of the River Hill Fourth of July parade? It seems this group was a big hit: 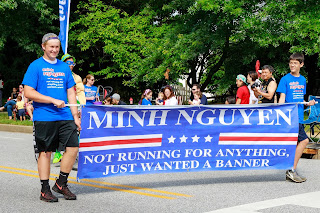 I don't know the backstory on this, but I do know that it caught the fancy of many a local resident yesterday, not only in person at the parade, but online afterwards as people shared parade photos.

Why? Is it because there's just something fun about challenging the political status quo? Or perhaps we all secretly would like to march in parades with banners and matching t-shirts with our names on them? (And without all the work of actually running for office!)

Public service is a noble calling. Politics is not. We think of public service as listening to and helping constituents, making fair laws, gathering citizens together to work on community problems. Politics is polling and mass mailings, private fundraisers and marching in parades with banners. And matching t-shirts. We admire the former. And shrink from and mock the latter.

And yet both are, at least in our culture, inextricably linked. You can't run a campaign without the money. You can't win without name recognition. Each election cycle sees more of the same. Many people look at this process and roll their eyes. They question the motivation of anyone who would want to do that. It must be about ego, or power. There must be some inherent selfishness at work.

We enjoy laughing at the absurdity of Minh Nguyen who just admits he/she wants the spotlight for the spotlight's sake. But I think that's because we have an inherent distrust of the "political" aspect of public service. It's unseemly. It feels rife with possibilities of deception.

Will the County Council's passage (and subsequent override of the County Executive's veto) of CB 30 make a dent in the local politics game? I don't know if it will change how the public feels about politicians, but I do think it will change who can afford to run, and that's a good thing. I think it will bring more diversity--racial, ethnic, and economic--into Howard County public service.

In closing, here's an exchange between two local residents that made me smile every bit as much as the photograph above:

You would know all the plans for things if you got on the County Council...there are spots open in 2018...we could use more [local] representation!!  ;)

And deal with angry people like myself??? NO THANKS! LOL

That's someone who clearly understands what public service is all about.