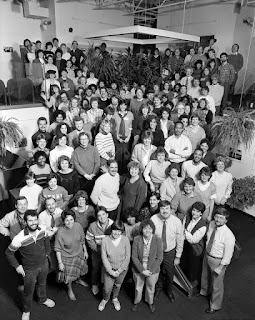 Did you know that former employees of Patuxent Publishing have their own alumni page on Facebook? This company photo is from that page, and it’s probably as close as I will ever get to knowing what the inside of that iconic building looks like. Look at all the people in this photo. In an age when newspapers are continually thinning staff, this picture speaks volumes about a world that is most likely gone forever.

The alumni of Patuxent Publishing lost one of their own this week: former sports editor Carol Gralia. Ms. Gralia came to Howard County in the late 1970’s, working as a sports writer. She eventually became Sports Editor. If your children played on local teams during those years, you already know her name. She retired in 2012, and in 2013 she was named to the Howard County Community Sports Hall of Fame. In her retirement she trained and received certification as a yoga teacher, with additional certification in yoga for Seniors. She went on to serve on the board of the Retreat Center of Maryland.

What I want to share with you today are the words of Ms. Gralia’s colleagues. Some of them may even be in this photograph. Their tributes speak to the excellence of her work, her dedication, her work ethic, her generosity of spirit.

Local/community journalism often doesn’t get the recognition it deserves. @HoCoTimesSports was better for having Carol Gralia steer the ship for so long. Condolences to those who knew her so well at Baltimore Sun Media Group.

This is the saddest news. Carol was a guiding force for everyone in the newsroom. She was no-nonsense, but so kind, and an incredible resource when it came to the community. She taught me so much by just doing, and being.

From a longer piece by Jack Gibbons:

She covered and directed coverage of sports in Howard County for more than 30 years  and earned a place in the community's Sports Hall of Fame. What she earned even more was the devotion of readers. She made sure that girls and boys sports were covered equally -- a trademark of her predecessor and dear friend, Karen Brelsford -- and that there were no favorites among schools, rec councils or athletes. She covered games, edited the work of others and produced an award-winning weekly sports section for the Howard County Times and Columbia Flier.

Carol was a wonderful person, a great sportswriter, the consummate community journalist, and a tireless advocate for gender equality in sports long before it was cool. I was lucky enough to work with her for ten years right out of college.

Carol Gralia was an incredible advocate for equality in sports and sports journalism. Howard County has lost one of its brightest lights. Rest In Peace, Carol.

I was a little hesitant to bring you this story because I did not know Ms. Gralia and because it’s clear that there are so many local journalists more qualified to bring you her story. But here’s the thing: I don’t think any of them still work for the entity which now produces our local newspaper. Will the Howard County Times give her the tribute she deserves?