This upcoming event at the Owen Brown Interfaith Center caught my eye. 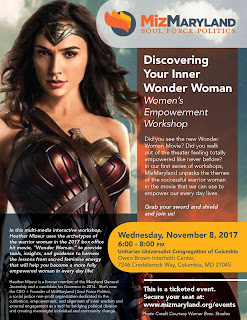 As you may recall, Heather Mizeur is a former member of the State Legislature who ran unsuccessfully to be the Democratic candidate for governor in 2014. She recently launched a new website called MizMaryland: Soul Force Politics. This event is clearly a part of her new venture.

When I first took a look at the photo above, it brought to mind the Halloween years ago when my fourth grade daughter wanted to be Xena, Warrior Princess for Halloween. Despite the fact that I had no particular costume-making skills, I lovingly recreated a Xena outfit from materials we had on hand. I knew that fourth grade is the peak of a young girl’s confidence before it is often eroded by the challenges of puberty. If she wanted to be a warrior, so be it.

Many failed political candidates reappear on the scene as inspirational/motivational speakers. That is nothing new. What is new is this particular invitation to women with a strong (s)heroic bent. Will people find it powerful or silly? Will her message connect with the people she is trying to reach?

Often politicians trade in a sort of hero-worship mentality. “I’ll be your champion. I’ll fight for you.” The message here is different. “You are powerful. You can find that power within yourself.”

Or what about this? From the Baltimore Sun:

Howard County Police Capt. Mary Levy was promoted to one of the agency’s three deputy chief positions on Monday, becoming the first female officer to attain the rank of major.

The Howard County Police Department (the way we know it today) was created in 1952. It’s 2017 and we have just now appointed the first woman to the rank of major. Oh. My. Word. Why did this take so long?

It is no wonder that Ms. Mizeur is inviting Maryland women to embrace their own inner power. Certainly equal treatment and representation under the law is more than a long time in coming.