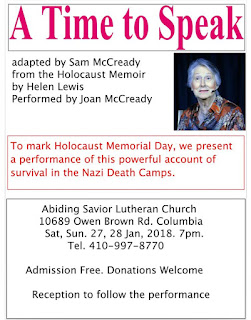 This weekend you have the opportunity to see an amazing, one-woman show that is the true story of one woman’s journey through the horrors of the Holocaust. Her name was Helen Lewis. She was a dancer.

The play, “A Time To Speak” is an adaptation by Sam McCready of a book by the late Helen Lewis and is performed by actress Joan McCready. Mrs. Lewis spent her postwar life in Northern Ireland. From her obituary in the Belfast Telegraph:

Having made a new life in Belfast she became involved in dance teaching, choreography and enjoyed a long association with the Lyric Theatre.

It is through the Lyric Theatre that the McCreadys met Mrs. Lewis and became lifelong friends.

In 2009, shortly before Lewis’s death, Maryland-based director/actor husband and wife Sam and Joan McCready premiered a dramatisation of A Time to Speak. It takes the form of an extended monologue, in which the words of the writer are given voice by Joan, adapted and directed by Sam. On many levels, this was a bold undertaking, which had been several years in the making. A deep friendship had been forged between the three when they were part of the circle of creative individuals who constituted the early life of the Lyric Theatre. On a number of occasions they spoke with Lewis about the idea of a dramatisation and they recall that every conversation ended in the same way – she would give her permission only if the central character was played by Joan McCready. The ultimate challenge was to determine whether it was possible to translate these piercingly intense personal memories into a credible piece of drama. (From The Enduring Resonance of “A Time to Speak”, Culture Northern Ireland.org)

I saw this production several years ago in Baltimore and it is brilliant. The dramatic adaptation keeps the story moving forward and holds the audience’s attention with each unfolding bit of the narrative. Mrs. McCready’s portrayal of Lewis is stunning. The spirit of this remarkable woman shines through.The words of the play are enhanced by music and images which serve to take the audience even more deeply into the experience.

I can’t think of a better time to remember and honor victims of the Holocaust than the very moment we find ourselves in. Please come- - Saturday or Sunday evening at seven pm, Abiding Savior Lutheran Church Hickory Ridge. Admission is free. If you are thinking of bringing children I’d say that, because of the intensity of the subject matter, the play is appropriate for middle school age and up.

'I am not just telling this story for Helen but for all victims and survivors,' [Joan McCready] says. 'One of my most enduring memories is of performing in Exeter, in the third oldest Ashkenazi synagogue in the UK. I felt humbled standing up at the front of that building, surrounded by a congregation of Jewish people. They listened intently to every word. It was daunting, yes, but I took strength and inspiration from their presence. Afterwards, they all said ‘please keep telling our story, no matter how often, keep telling it.'