Last night as it poured for at least the fourth time of the day my Twitter feed was filled with people worried about Old Ellicott City.

This is the tweet that stood out to me:

we should take Ellicott City..... and PUSH IT SOMEWHERE ELSE

In fact it’s the severity of recent storms which has been taking Ellicott City and pushing it somewhere else. But not as a whole. In pieces. In shreds of mayhem and destruction. The force of the rushing water does not care what is in its path. 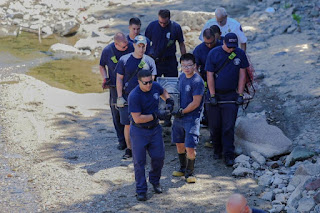 Look at this photograph from the County Executive’s Facebook page. You may already know what it depicts. But what if you didn’t?

Bringing the clock back after the past two massive floods has been a symbol of the fierce will of the community to rise again. And yet, when I look at this photo I see pall-bearers.

I’m literally praying that Ellicott City gets through this rain tonight :/ they cant take a third

What is the situation in Ellicott City ?

its been raining for three days off and on and the skies just opened up.  i'm scared for old ellicott city.  anybody have data?


How’s everyone in downtown Ellicott City doing tonight?  Please be safe! #ecstrong
Does this blog post have a point? Maybe. Am I going to tell you something you did not already know? Maybe not. I am coming to terms with the reality of our “new normal”: a condition characterized by a deep underlying fear every time it rains. Like wives and mothers who scanned the horizon when loved ones were out at sea, we watch the skies and worry.