The talk of the town yesterday was this photo shared by Black Flag Brewing Company. A tip of the hat to Elevate Maryland’s Tom Coale for bring it to my attention. 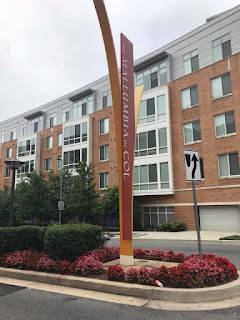 This sign was put up about the same time as we released a 13.1% beer... not saying its our fault but someone clearly didn’t share their bottle of Double Barrel Black Mage... #SharingIsCaring #LetsGoToTheMallumbia

Yes, I just had to know if this was real or photoshop, so my daughter and I went down there to check. And it is the real deal. Located in a cross street to the right of the Metropolitan, the sign proudly announces, The Mallumbia in Col”.

What the heck? Has it always been wrong or is this the result of a prank? It appears that the sign must be made up of three sections and they were assembled incorrectly. But why would this have escaped notice until now?

I am wondering if this sign will now draw eager locals hoping to take their pictures with it for a bit of fun. Will Mallumbia become a hashtag? A trending topic? Will people write letters to the editor of the Columbia Flier complaining about the shoddy implementation of Downtown Development?

If there is any more to this story, rest assured that I will bring it to you. In the meantime, I just had a thought. Could the”in Col” be a hint that the perpetrator of this mix up is none other than Col Gateway? Has anyone seen him lately?