As you know, I’m very excited about the groundbreaking for the new phase of Blandair Park. That being said, does it seem odd to you that certain faces have been obliterated by the Kittleman logo in this campaign advert?

A friend shared a screenshot taken from a video of the event.

My teenaged daughter walked by and took a look as I was comparing the two. “Isn’t that the park you were talking about with the inclusive playground?” She took a closer look. “He covered up Calvin Ball’s face?” She was incredulous. “It’s supposed to be an inclusive park and he couldn’t include the one guy who actually lives in the neighborhood?”

I told her I was going to steal her line. She knows.

Here is the ad in its entirety. 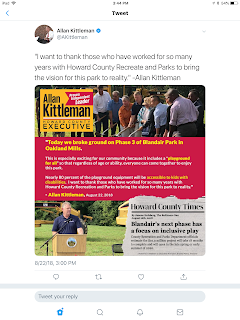 If his persistent appearance in my Twitter feed is any indication, Mr. Kittleman has a healthy campaign budget. And it’s impressive that they could turn a community event into an advert in less time than it takes for the dirt to dry on the shovels. There’s just one thing.

“My Dad taught me that you put petty politics aside and you do what is best for the community.” - Howard County Executive Allan Kittleman

Taking a community event, one that required cooperation amongst many, and turning it into a campaign ad may be par for the course these days. But covering up your opponent’s face with a campaign logo?