Starting out with a shout out to Washington Post reporter Ovetta Wiggins, who provided much-needed context to a Statehouse photograph. 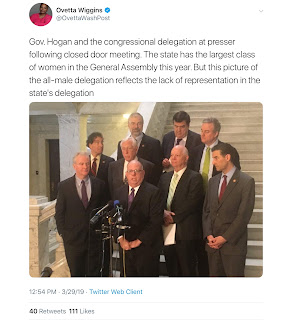 My initial response to the same photo looked like this:

The lack of representation of anyone who isn’t a white man is appalling. No matter what they were discussing, this lack of diverse perspectives limits the conversation. That’s a problem. 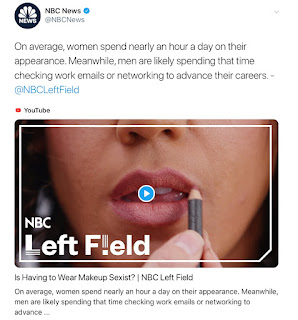 Truth in advertising: I haven’t yet read the article because I was so gobsmacked by the assumptions made in the promotional tweet. I couldn’t resist pushing back a little:

Perhaps to understand why I find such an article frustrating you might appreciate seeing it flipped. How would that look? I’m not even sure at this point. Should we do it like this?

On average, men spend nearly one hour less on self-care and hygiene activities and attention to their outward appearance than women. By contrast, women use this time to prepare for their daily responsibilities by engaging in a disciplined morning routine.

On average, men spend nearly an hour a day on their appearance. Meanwhile, women are likely spending that time checking work emails or networking to advance their careers.

In my opinion it’s just a specious comparison to begin with. I’d go after the huge imbalance in time spent on household chore, childcare, and emotional labor first. But that’s just me. You may think otherwise.

I’ll leave you with one final question. How long is it going to take for more women and more people of color to make it into that top photograph? Because that is long overdue.