It’s Mother’s Day. I’d like to dedicate this space to an amazing Oakland Mills mom who has entered home hospice after battling Stage IV breast cancer for the past year. Because of Twitter I will always think of her as “momzovko”, and because of Facebook I know how much she has loved her sons and her grandchildren. So, for me, this Mother’s Day is for her.

I first became aware of Lisa Spangler Zovko on Twitter when I was looking for Oakland Mills news. As momzovko (@Zovko1Lisa) she was generating an amazing amount of positive, OMHS-related sports tweets. As one of the Admins for the Oakland Mills is Awesome Facebook page, I'm always on the lookout for OM-centric information. Discovering Lisa was like striking it rich. Her love of the students and the school shines through in everything she writes.
Yesterday she posted the following piece on Facebook and I immediately asked for permission to share it here as a guest post. It speaks to so many things for me: a diverse circle of friends, brought together at Oakland Mills High School, supported by people who live the Columbia vision every day in the here and now. It also speaks to the very real problems our nation faces in acknowledging and dismantling systemic racism.
It tackles issues both big and small. It comes from a mother's love and her belief in the value of all children, not merely her own. And it speaks volumes about the power of an inclusive and loving community. 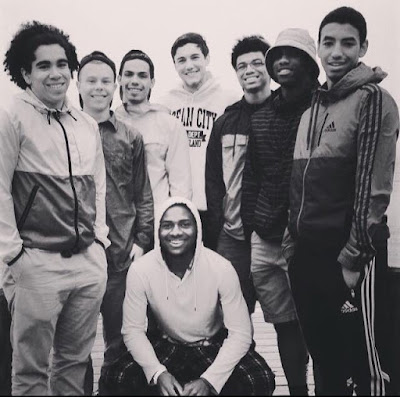 I don't care if you don't want to hear this. You can block me. But this has to be said. In this photo is my son Ryan and all of his closest friends from high school. Awesome right?? They are all wonderful young men that will do great things. Here's the rub. Austin's mother and I don't have to worry the same as Kian's mom or John's mom or Jay's mom or Khaaliq's mom, or Adam's mom. We don't have to worry that someone might think something about them because of the color of their skin. That's called white privilege. That's why #blacklivesmatter. These boys are all like sons to me and I pray everyday that they don't come upon the wrong person with a gun.

We must stand up for all. Every micro-aggression that happens to these kids on a daily basis should not happen!!!!
Ryan is transferring from the college he started at in Pennsylvania in large part because of the levels of racism present among the soccer team and on the campus in general. Racist micro-aggressions were present towards his friend . And when he spoke up about it to the young men who were saying things he was "blocked" from the group chat containing them. So he went to his coach.

Unfortunately the coach wasn't that helpful. Everything was swept under the rug and not dealt with properly. I am proud of Ryan for doing the right thing even at his own expense. Because he was labeled "soft" and "weak" by his white teammates for his actions. He was not afraid to stand up for what was right. He was not afraid to use his white privilege to stand up to racism.

It's NOT enough to just believe something you have to speak up and #standup .

I’m thinking of Lisa and her family today. I’m thinking of her friends, whose messages of love are filling her timeline, and of all the many people whose lives were touched by her nursing care. Send some good thoughts her way today.

I went looking for some deep and meaningful quote about being a mother but, in the end, I decided the best words to leave you with are Lisa’s words:

It's NOT enough to just believe something, you have to speak up and stand up.

Choosing that path is the best way I can think of to honor her. Let your love be active, let your beliefs be heard and felt in how you live.