I need to interrupt my plans for the day and acknowledge something bigger. 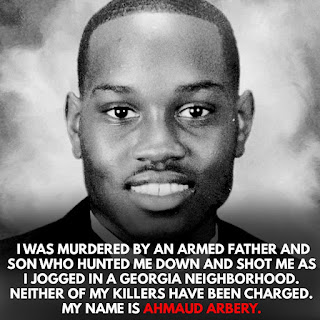 This photo comes from the Twitter account of actress Kerry Washington. The story comes from Georgia and its impact is felt everywhere in this country.

That’s what makes it a local story. As long as things like this happen and our society and the justice system allows it, Black citizens everywhere cannot feel safe. Even in a place like Howard County.

If white citizens remain silent in the face of a story like the murder of Ahmaud Arbery, it speaks volumes. It means it’s not important enough to be outraged by. It can be safely ignored. It means that there are people who can read that piece of news and not see themselves or their family members or their friends. And they just turn the page.

As long as there are white folks who can just ‘walk on by‘ the murder of a fellow American for being black while jogging, our Black friends and neighbors will not feel safe. Because if we don’t rise up in love and outrage to protest this injustice then we are tacitly accepting it. Acknowledging that murder based on race is part of our America.

If you thought your neighbors felt that way about you and your family, would you feel safe in Howard County?

Recently I wrote this, in response to a teen sharing a racist social media post:

The problem isn’t simply with the one who posts the racist language but also with all who are willing to look the other way.

The problem isn’t simply with the one who pulls the trigger but also with all who are willing to look the other way.

Who are we going to be, Howard County?