Maybe Not the End of an Era

You may be aware of Garrison Keillor's Lake Wobegon, "the little town that time forgot and the decades cannot improve." Devotees of Keillor's fictional hometown and the radio show centered around its residents bid farewell to "A Prairie Home Companion" this past weekend. The show, a mix of drama, live music, humor, "commercials", plus Keillor's signature monologue about the town, began in 1974.

Now Keillor is retiring. The show will continue with musician Chris Thile at the helm, but all indications are that Lake Wobegon and her inhabitants will disappear into the mists like Brigadoon. The door is closing on that magical pocket of community life.

Yesterday I took a trip to a place very much like Lake Wobegon. You might say it's the little village that time forgot: Dickeyville. It's an old mill town nestled into the banks of the Gwynn's Falls. The orginal houses were built for mill workers in the 1800's. Today there are one hundred and thirty seven homes. It's a close-knit community with a lot of personality.

I've come to know Dickeyville over the years as it is the home of my in-laws, Sam and Joan McCready. They brought their own personal flair for neighborliness with them from Belfast, Northern Ireland. The village life suits them. Through the years they have participated in many Dickeyvile events--marched in the annual Fourth of July parade, hosted Garden Club events, organized art shows and historical exhibitions, and put on theatrical performances.

As a part of Dickeyville's week-long Fourth of July festivities, Sam and Joan presented an afternoon of Shakespeare in the Park. The McCreadys are life-long actors and Sam McCready's tenure as a driving force in UMBC's Shakespeare on Wheels may have served as a bit of inspiration for the event. A celebration of an English playwright by Irish actors and American musicians for the Fourth of July? Of course.

That's Dickeyville for you.

Shortly before five pm residents began turning out in the meadow by the dam. They brought lawn chairs, patio chairs, folding camp chairs, quilts, and beach towels. Soon they were uncorking bottles of wine and passing around sandwiches and other delicacies from baskets and coolers. Neighbor greeted neighbor. Children ran around in the grass. The performers readied themselves and made last minute checks to the sound system and the makeshift stage.

What followed was an hour or so of live theatre and music by the McCready's and Dickeyville musicians. Monologues, sonnets, and scenes from several plays were interspersed with songs accompanied by guitars, mandolin, recorders, violin, and tambourine. One versatile assistant played "all other additional parts" with flair. A stage manager handled all sound effects (plus directed audience participation.) Village children stood in for Titania's fairies; one brave boy endured Titania and Oberon's jealous tug-of-war.

All the while the sounds of birds and the rushing waters of the Gwynn's Falls surrounded us. As the performance went on I couldn't help but feel that we were all participants in a sort of Garrison Keillor experience. The show had just the right mix of drama, humor, music, and audience participation (even a Jeopardy-style quiz and a sing-along!)

"Live from the Meadow by the Dam! It's a Dickeyville Home Companion!" 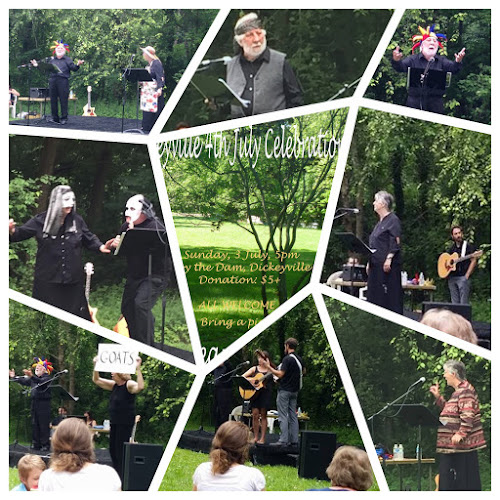 And so, this weekend, we bid a fond farewell to the little town of Lake Wobegon.

But, if you look carefully, you may discover little pockets of magical community not so far away from where you live.