A Face in the Crowd

Saturday I attended the kick off event for Courtney Watson's campaign for the office of Howard County Executive. I was with the band. 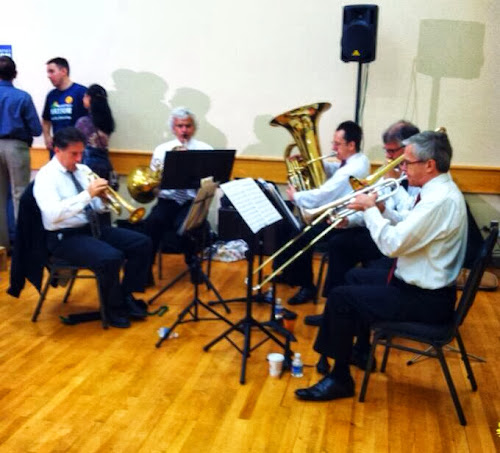 Truth be told, I would have been there even if my husband hadn't been playing tuba. I like Courtney. I've seen her reaching out to constituents through social media, most notably during storms and power outages. And I like the people I see working to support her.

Someone must do the work. Even before well-wishers walked in the door Saturday morning, people were busy. It's not just about wearing a "We're With Watson" t-shirt. The event itself had to be planned, the venue chosen and booked, tasks assigned, logos for signs and t-shirts created, food ordered, supplies purchased, speakers chosen and invited. In that room Saturday morning were people who care enough to get up early, stay up late, make lists, brainstorm, reach out and follow up.

You can tell a lot about a candidate by looking at who those people are. And when it comes to Courtney Watson, those people are ones I admire and respect. So I'm looking forward to great things from this team.

Let's not forget the guests. Some were clearly enthusiastic supporters, some were good democrats who root for the home team, some came to see and be seen. At every political function there will be people who view the event as an opportunity to forward their own interests. You can look at that as selfish, or simply as choosing to take advantage of fertile ground for networking.

I don't know what I think about this, probably because at heart I am not a politician. I was just happy to be a face in the crowd. I didn't need to be important. I saw friends, I learned more about what Courtney stands for, and I fulfilled a very necessary function: I was happy to be there.

We all choose, in one way or another, the degree to which we will be involved in our communities and in the workings of democratic self-government. There is room for many kinds of participation--from running for office to staying well-informed about the issues.

Posted with Blogsy
Posted by Julia A. McCready at 5:04 AM