Parable of the Seed

Once there was a tree, a lovely decorative apple tree, that lived for many years outside a Columbia home, blooming nicely in the Spring and producing indelible, slippery little apples each year. It was a beautiful little tree, but as time went on it began to fail. As its branches reached closer and closer to the little house, the strength of the tree faded, and it became a hazard. One day it was cut down, and the stump ground down, leaving an open rectangle of mulch right in front of the house.

When Spring came, the owners of the little house cleared the patch of mulch and weeds, and turned the soil. They planted high quality grass seed, and watered faithfully. Nothing happened.

But they did not give up. They planted more high quality grass seed, watered faithfully, and were cheered when a bit of grass began to sprout. And yet, when summer came to an end, the little patch looked like this: 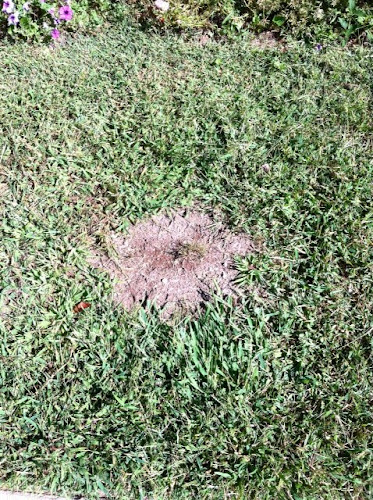 The open patch had been filled by an invasive and highly successful ground-cover. At the very center, a tiny tuft of "real" grass stood alone.

The meaning of the Parable is as follows:

Of course it isn't a parable. It is a true story, and I don't know what to make of it. Should I feel defeated that we could not grow "real" grass, or satisfied that most of the patch has filled in with something green and growing? Is that enough, or should I want more?

What is growth? What is success? And what is the best response?

Now if it were a parable...how would you interpret it? Is the "real" grass the Columbia Pioneer, trying to hold off the invasion of those who are not true to Rouse's vision? Or does the comparison between the two only highlight how much we need to understand people and opinions different from our own?

I drove by the Rouse building twice yesterday. It looks vulnerable somehow. And yet I don't feel sad because this is the work of restoration and improvement. What we think of as 'our old building' is a part of a new plan, not the victim of a wrecking ball.

There will be life there. It will be different, yes. But we can put ourselves into the parable as it evolves.