Over the past several days I have learned quite a bit from reading the comments section for my own blog. This means a lot to me, because one of the things I treasured so much about Tales of Two Cities was the conversations it started amongst its readers. Granted, the conversation I started about an entrance to Blandair Park started out on rather rocky footing, but it has been evolving.
When I attended a meeting about Blandair, hosted by the Oakland Mills Village Board in the Spring, residents expressed opposition (loudly) to any entrance to the park at Timesweep. They had a long list of reasons why neither kind of entrance was acceptable. I got the feeling that there was deep-seated suspicion that, as long as any sort of entrance remained, it could be used to wreak havoc and destruction on their neighborhood.
And yet, both Jon and Melissa have taken me to task for ignoring the plain fact that there is a pedestrian entrance to Blandair Park right now, and that it works just fine. I can't express how happy this makes me. However, I must respectfully disagree. We do not have a pedestrian entrance to Blandair Park at Timesweep. We have a decision waiting to happen. What we have is in a state of limbo. If we had an official pedestrian entrance, it would look like this: 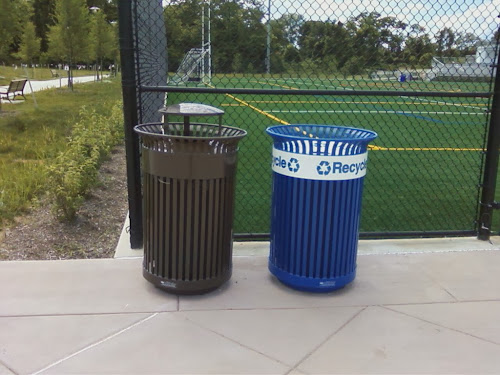 That is to say, it would have professional landscaping, official trash receptacles that get emptied regularly, adequate lighting, and regular supervision by Park Rangers. But, this is what we do have: 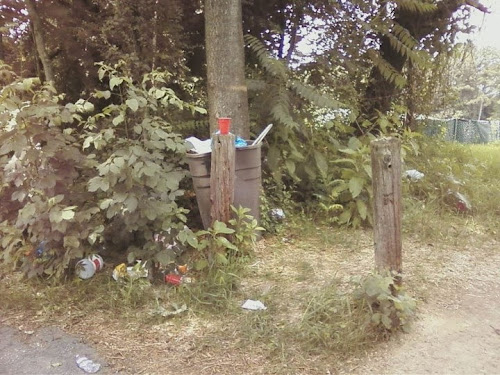 The reason it looks like this is that the neighborhoods involved refused to come to any decision about this space, due to anger and mistrust. So, the County said, let's allow this sit for awhile and come back to it. The decision will be made at a future time in conjunction with the neighborhoods.
Well, the future is now. This is no trick, no plot, no conspiracy. It has always been on the books to come back to this issue and come to a resolution. Don't believe me? Read the documents on the Howard County website. If, as I am sensing from Jon and Melissa's comments, the existence of a pedestrian entrance has become more acceptable over time, then that is the solution that a democratic majority will choose.
It is true that I think either solution could work well, if done right. But, I believe that based on a trust that it could be done right. What I continue to hear from some Emerson Hill residents is a lack of trust, which makes it impossible for them to work collaboratively in this process. It is hard to move forward when you are angry. I get that.
So come to the meeting. State clearly what you are for. What do you support? What would you be willing to defend to your neighbors and friends? What will you be happy about in the future? Let this meeting be different than the last one in that we find we can work together on a solution we can be proud of. We all have things that make us angry. Now let's go a step further and tap into what we share and make things work for the good.

Posted with Blogsy
Posted by Julia A. McCready at 4:27 AM