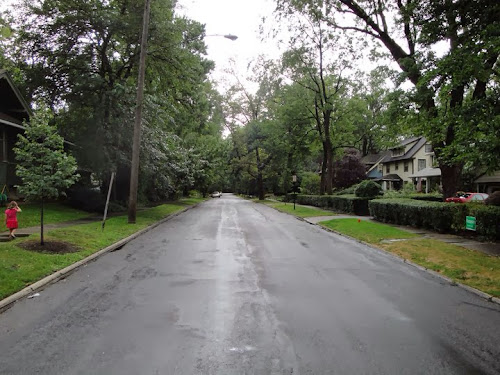 I grew up in a neighborhood that looked like this. (This photo is from a Coventry/Cleveland Heights Facebook group.) Mature trees, old sidewalks, tree lawns, older homes of the center hall colonial variety.

As an adult I lived in one apartment after another. I yearned for the day I would live in a real house, in a real neighborhood. My older daughter and I had a mantra of sorts, "Someday we'll live in a house with an upstairs and a downstairs, a washer and a dryer. And a treehouse."

When we moved to Columbia in 1999 and embarked on a new life as a family in the New American City, it was, in many ways, a dream come true. We finally had that house (minus the treehouse, but, maybe someday...) and yet something was missing.

I had in my mind the now somewhat mythical neighborhoods of my youth. But my new home was a quadroplex amongst quadroplexes. No fireplaces, long driveways with garages out back, no architectural detail, no back staircase, or butler's pantry. No basement or attic.

It was a house with an upstairs and a downstairs and a washer and a dryer, but was it a Real House? In a Real Neighborhood? Was I holding up a standard from the past that my real life would never be able to attain?

As I drove to church on Christmas Eve, and later when I drove home from a party in Running Brook, I noticed how many people had put up Christmas lights this year. And not just on the detached houses--what I would have called "Real Houses" in the past. Within my own little neighborhood of Cinnamon Tree at Talbott Springs it seems there are more Christmas lights than ever.

Something about those lights spoke to me of how my little neighborhood and my little quadroplex have truly become my real home. Putting out Christmas lights is an act of faith somehow. "This is my place. I am shining my light for all to see."

Every so often the figure of Jim Rouse is invoked to prove a point or try to shape debate on a current issue. In most cases I deplore that sort of usage. I will say that the spirit of Columbia lives on in 2013 when someone like me, who grew up in old suburbs, all-white suburbs, can come to a new place, live in a very different sort of house, in a very different kind of neighborhood, amongst a wide variety of neighbors, and feel at home.

And that's what Columbia is all about, Charlie Brown.

Posted with Blogsy
Posted by Julia A. McCready at 5:31 AM