What You Can't See

Posted on the Facebook page for A Mighty Girl:

Astronaut Sally Ride on why role models matter: "Young girls need to see role models in whatever careers they may choose, just so they can picture themselves doing those jobs someday. You can’t be what you can’t see.” 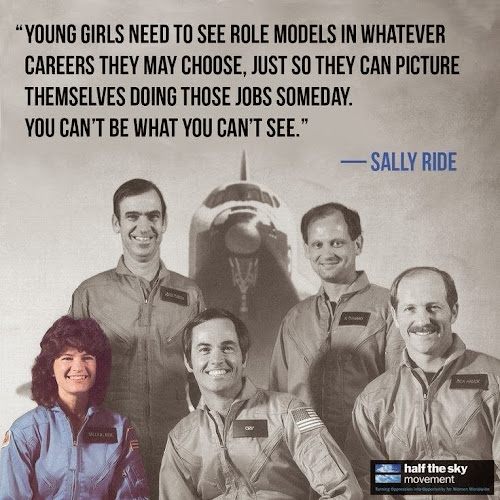 Yesterday Howard County blogger Bill Woodcock had a little fun with the notion of activist (dare I say crusader?) bloggers in our local community. Okay, maybe a lot of fun. I must admit ignorance of the Avengers universe, so the character match-ups were lost on me. But I love the game. Many a long car ride in my family has been spent casting certain groups of friends as the inhabitants of the Hundred Acre Woods, or as characters from the Muppets.

What leapt out at me, as you might suspect from my opening quote, is the lack of women. I know there has been plenty written about the lack historically of powerful comic book women superheroes. That is certainly changing. I enjoyed this thread about creating an all-woman Justice League. And I came across this piece which asks why we aren't seeing major motion pictures based on these characters.

The trickle-down effect for local bloggers is that, if there aren't a lot of women in your chosen universe, then you won't be able to include a lot of women bloggers in your cast. Let me restate: I know that this blog post was for fun. No harm was meant in the assembling of this cast of characters.

But you can't be what you can't see. Sara Husain, formerly of Sarasays blog, addressed this issue head-on and took a lot of flack for it. I've had a few conversations, here and there, about how blogging in Howard County sometimes feels like a boys' club. Not many, really. We're a pretty friendly, well-balanced bunch.

And yet--yesterday I was inspired to imagine that perhaps the women of Howard County blogs need to create a league of their own. In the area of activitist bloggers, the following came to mind:

Honorary Member: Alice Giles, although she already has her own League.

This is by no means a comprehensive list. I read many more Howard County blogs by women than the ones listed above, but these were the ones that came to mind as ones where local advocacy is a recurring theme. Feel free to suggest others in the comments space. Again, I am doing this in the spirit of fun.

What universe do we choose? Which worlds will be our playgrounds, our domains to rescue and restore? Our daughters and our sons will look at the blogging community we have created and look for pictures of what they can be. Let's give them something dream-worthy.

If we want them to shoot for the stars, then so must we.

Posted with Blogsy
Posted by Julia A. McCready at 5:24 AM