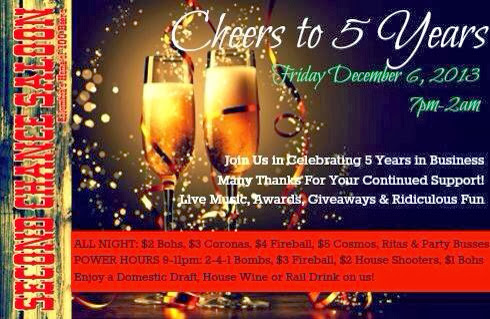 Five years ago, I stopped dipping my toe into the shallow waters of social media and jumped all the way in. After learning that The Second Chance Saloon would be opening in the space previously inhabited by Fire Rock and Last Chance, I decided I needed to do whatever I could to make sure their opening night was a success. So I created a Facebook group to publicize the event.

It was a great night. I don't know how much difference my small effort made, but it changed my perception of what social media could do. And it reinforced to me that, if we wanted a successful bar-restaurant-hangout in Oakland Mills, we had to support it. How many times in recent years have we heard that a local restaurant was closing and thought, "ohhhhh! I wish I had known! I wish I could have done something to help." Sound familiar?

During the depths of the recession, owner Wendy Binder shared concerns with the Village Board about growing and maintaining a consistent customer base. That's when I decided to create "A Little Lunch Music" (http://columbia.patch.com/groups/julia-mccreadys-blog/p/bp--village-greentown-squared-3) in an effort to bring young families in for Saturday lunch. Out of the same conversation came an informal board commitment to have dinner at The Second Chance before Tuesday board meetings--half price burger night, a bonus.

In the past five years, The Second Chance has been there for many events large and small for my family and friends: birthdays, date nights, Ladies' Nights and Swaps, Vendor/Crafter Shopping Events, parties for Howard County bloggers. Councilman Calvin Ball held a political event there. And let's not forget Beer Club.

It served as a second home for my nephew Chris, who lived with us while doing a college internship. Hungry for the companionship of people his own age, he went down and hung out at the bar with friendly bartender Kevin. Speaking of friendly bartenders, Second Chance has given Oakland Mills resident and Howard County teacher Brian Donoughe the opportunity to tend bar for the Help A Child Fund charity. In fact, they support a variety of charities. Have you donated a toy to Toys for Tots yet?

I've enjoyed music by local friends including Jim Alvey, the McCready/Denhard duo, and neighbor Christina Henderson. I've had dinner as "a woman alone", with my ipad for company, and been treated like visiting royalty. One such night I convinced Howard County blogger HowChow to come down and enjoy outdoor seating and some wings. I've even had brunch on the cactus patio with friends and their dogs!

The Second Chance is more than a commercial venture to me. They helped me host my daughter's bridal shower. They cheered me on when I had dinner before the Oakland Mills Candidate night, and they brought me my usual Dogfish and a pat on the back when I lost.

Recently Oakland Mills resident Ian Kennedy looked at a crowd of people assembled in the Other Barn and wondered aloud, "What would happen if we could channel all this energy for good?" Today, we celebrate five years of a place which is both completely committed to the village of Oakland Mills and continues to draw people in from surrounding areas. The Second Chance Saloon is a bright spot where a lot of good energy is being channelled to keep our Village Center alive and kicking.

Many thanks to Wendy, Declan, Lauren, Jacquie, Christy, Ebony, Kevin, Franny, and all whose names I do not know or have forgotten. Thanks to all who support this business and make it the cool place it is through their patronage. If you can't make it tonight, that's okay. They'll be open tomorrow.

Let's keep it that way.

Posted with Blogsy
Posted by Julia A. McCready at 5:33 AM