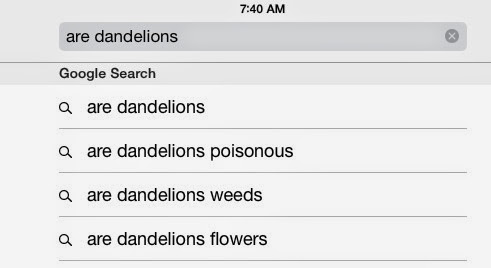 It's that time of year again. Warmer weather, sunshine, and rain bring a lush, green lawn and...dandelions. And the battle begins. I get my old paring knife and spend ten or fifteen minutes trying to eradicate them. I almost always tire of bending over before I have gotten them all. 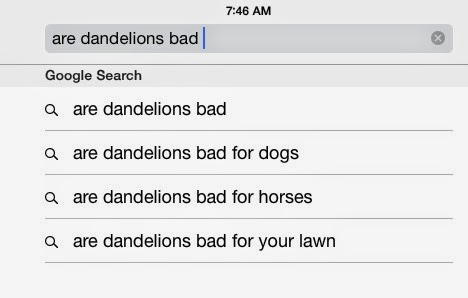 What is this voice inside me, year after year, that tells me to dig up dandelions, to cut down to the root and extract them?
It's my mother.
My mother went after dandelions like a revival preacher casting out sin. Why? I don't know. Probably because she felt they were bad for the lawn. But deeper than that was this: if you don't dig up the dandelions, other people will think you are a bad person. Neighbors will look askance at the person who doesn't maintain a dandelion-free lawn. They may not say anything, but...
"Cluck, cluck, cluck. Look at all those dandelions. There goes the neighborhood."
Now, this was before weed killers and lawn services. It was Mother and the paring knife against the yellow enemy. And woe be unto the child who picked a fuzzy one and blew to make a wish...
It is amazing to me, smack dab in the middle of middle age, how many behaviors we cling to from our childhoods, even if they make no sense. I have to shake myself a bit sometimes and look at things anew. It is all too easy to go on automatic pilot, to fight the things we have always fought without considering if circumstances have changed. Or if our reasons ever made any sense in the first place.
This Saturday many angry people will vote in Village elections in an effort to beat back the enemy. In Hickory Ridge, Town Center, and Harpers Choice the battle is on to dig up the Inner Arbor plan for Symphony Woods by the roots. And these are people who turn out to vote with the same dedication that my mother brought to her war on dandelions. Because they have something to be against.
Columbia has to be about more than angry people. Doesn't it? Should the future of our community be shaped solely by people who have something to be against? Eleanor Roosevelt said, "The future belongs to those who believe in the beauty of their dreams."
What do you believe in? Are you willing to vote to make it so?