One of the biggest things I have learned from being involved in the local blogging scene in general, and from Jessie Newburn in particular, is the value of social capital. In short, social capital is using your social media communications to "pay it forward." It is based on the assumption that those communications have a value.

Case in point: recently the Columbia Whole Foods hosted a tasting night for local food bloggers to try out new menu items for The Counter, the full-service lunch counter in their store. In return, the bloggers used their social capital by writing about their experiences, and also sharing information through tweets and status updates on Facebook. Here's where I come in.

I read this post on AngieKozBlogs and it made me hungry. I hadn't yet tried The Counter, but I had been curious. And now I was convinced. So on Wednesday, as the snow began to make its picturesque descent around town, I took my older daughter (HoCoHouseHon) for a lunch time adventure. It had to be this particular daughter because Husband is a meat and potato kind of guy, and Daughter Number Two is a chicken and fries kind of gal. 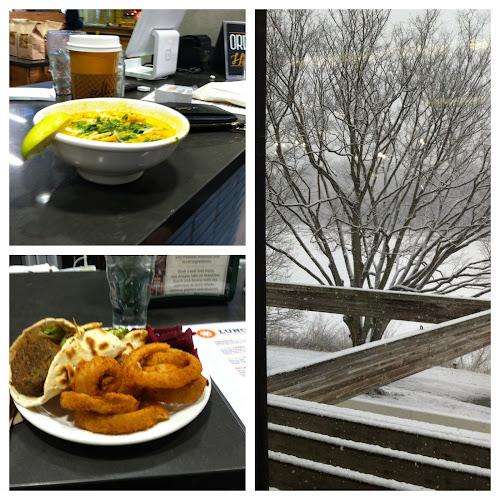 The mood was easy and relaxed at The Counter while we were there. I suspect that most folks were popping in to pick up a few things in the grocery because of the snow, and not taking time out for lunch. There were about four or five of us, I think. We quickly learned that you can really ask anyone behind the counter for help; they all take responsibility for assisting customers.

I had the Falafel Sammie with a side of onion rings. It was delicious. My lovely companion had a big bowl of some kind of curry soup which she loved. It had just enough of a spicy kick to it, and although you can order it with additional chicken or meatballs, she enjoyed it just the way it was. The food was excellent, the service was excellent, the portions were ample, and the prices quite reasonable. You won't spend your Whole Paycheck on lunch, that's for sure.

We enjoyed some friendly conversation with the fellow to our left. The leisurely pace of the day meant that staff joined in a bit as well, as we discussed how people drive in the snow, school closings, and so on. Truly it was my first experience of sitting at the lunch counter and just chatting with people. It felt to me like those small town experiences we read about or see in movies.

I don't mean to get too mushy here, but it was definitely a community experience. While Whole Foods is a big corporation, and Columbia is moving from a suburban backwater to a real city, our moment at the lunch counter was appropriately small, personal, human. There's definitely a "there" there.

And a heartfelt thanks to HoCoHouseHon for being an adventurous eater. Lunchtime wouldn't have been as much fun without her.