In honor of Earth Day I decided to revisit the site of several of my Earth Day clean-ups: the stub end of Timesweep Lane. Frequent readers of this blog will remember the time I decided to create my own personal "improvement association" in its honor.

In the time since, Howard County responded to neighborhood pressure and dropped the idea of creating an entrance to Blandair Park on Timesweep. The opposition, organized largely by residents of the neighborhood next to mine, Emerson Hill, claimed a park entrance would bring noise, traffic, trash, and crime to a quiet residential area.

Well, I went back yesterday. I admit I was so disgusted by the nastiness and scare tactics of the anti-entrance faction that I haven't even wanted to walk over there to see what it looked like. But now I know. This is the quiet neighborhood street they fought to maintain. 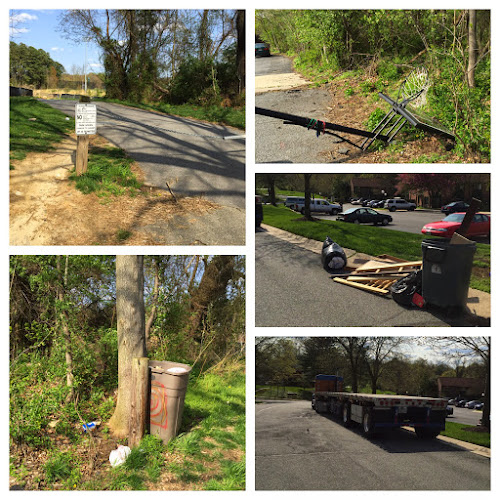 A hanging chain and a warning sign. Trash overflowing and on the ground. Piles of trash left out days before trash day. An enormous truck parked on the street. Beautiful, isn't it? The quiet beauty of a suburban neighborhood street, preserved in all its glory.

Had this been approved for an entrance to Blandair, we would see landscaping, trash receptacles, and words of welcome. Trash would be emptied frequently. The street and entrance would be under the watchful eyes of park police. To be clear, an entrance to the park would have been an improvement for this street.
Yes, there would be more traffic. We would have needed some additional signage or signal at Timesweep for turns. But we also would have more eyes on that street, and more people in high places caring about that street. As it stands, the Emerson Hill folks still have their suburban oasis while my neighborhood, Cinnamon Tree, looks like a trashy relative with its underwear hanging out. I resent that.
In addition, the people who can afford to pay for league play for their children's sports experiences would also be conveniently near to our Village Center merchants. Who would have benefited if we had made it easier for them to patronize our businesses? Everybody! Who knows--some of those visitors might have decided our village was a place they wanted to live in and bought a house here. Imagine that.
I'm pretty ticked off by what happened on Timesweep Lane. Cinnamon Tree at Talbott Springs, and Emerson Hill, and Rec and Parks could have worked together to make that street more attractive, and even safer. But that would have involved listening, and give-and-take, and compromise.
Today is Earth Day. And I've got nothing. Nothing but a trash bag, some gloves, and twenty minutes to give it my best shot. I wish I could do more.
Posted by Julia A. McCready at 4:39 AM