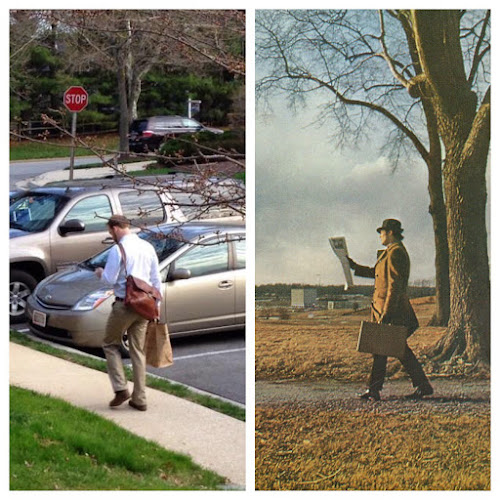 Local Man proudly posted his route and his time at approximately 7:30 am. He came in at a brisk seventeen minutes.

Reached by phone, Local Man was elated. "I've been building up to this for years," he explained. "Columbia Man's record has been untouched for a reason--that man is a legend."

When asked what's next on the horizon now that he's accomplished this amazing feat, Local Man appeared unsure, then made this suggestion--

Those of us here at VG/T² send our heartiest congratulations to Local Man on his achievement. Columbia Man could not be reached for comment.

Image above right is the iconic Rouse Company ad "There goes the 8:11 to Columbia" which I found at Columbia Archives. It ran in Time Magazine in March of 1971. The text begins, "Men walk to work in Columbia, MD. The walker above, engrossed in his Washington Post, makes it in nineteen minutes."

Any similarity between Local Man and Columbia Man is purely serendipitous.