The trouble with Oakland is that when you get there, there isn't any there there.

It has been recycled and reused many times and its meaning has evolved to mean a place which lacks a sense of place. Like Columbia Gateway, perhaps? We all bristled at Julia Louis-Dreyfus' disparaging account of working on Veep in a warehouse in the Gateway, but deep down were we in quiet agreement that there's just no "there there"?

Well, community belongs to those who are willing to work to make it happen. And last night at a meet-and-greet for local hero Colonel Gateway, held at Aida Bistro, I saw a room full of people hungry to be a part of ADG Creative's initiative to give Gateway more of a sense of pride of place. So what if some disdainful out-of-towner described Columbia as "home to one of the dreariest American landscapes imaginable"? It's our landscape. We may laugh about it amongst ourselves, but how much better it is to laugh at the antics of Colonel Gateway, whose humor is meant to bring people together.

Looking at Colonel Gateway as a community activist, I wonder how he felt about the success of last night's event. It drew somewhere in the range of seventy-five people who very likely wouldn't have been in the Gateway after business hours (or ever). Baltimore Sun/HoCoTimes' Jon Sham was surprised and impressed by the large turnout. Who knew whether some good natured buzz on Twitter would result in actual humans walking through the door? It could have been a bust.

It wasn't. The mood was positive, full of enthusiasm. Folks came ready to be in on the spoof of the time-traveling gentleman in colonial garb who loves Gateway and abhors those pesky geese. In short, people wanted to be there. They wanted to participate. Perhaps they wanted to learn more. All great qualifications for community building. And for having a good time.

How do you create change? How do you challenge people's attitudes in a positive way? Well, consider this. My local bank branch is closing and we have been notified that unless we specify a different choice, our accounts will be moved to the Gateway branch. Before all this excitement with the Colonel, I would have said, "Gateway! That's ridiculous. We never go over there."

And now? "Well, maybe we should be going over there more often."

Oh, and one more thing. This happened: 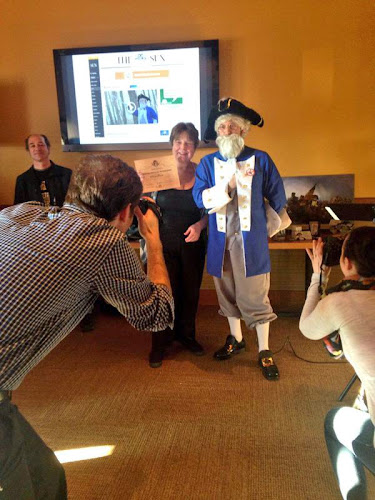