Gateway Grinds to a Halt 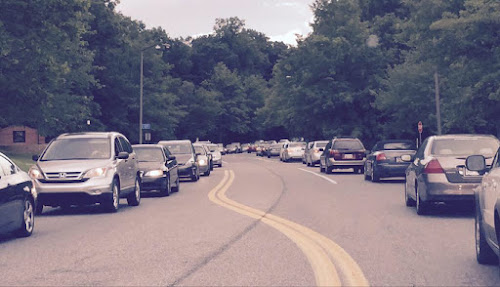 @ColGateway: There are quite literally geese moving faster than my chariot! #hocotraffic

@ColGateway: I hath not witnessed such traffic since the election of John Quincy Adams! #hocomd #traffic

@mduren: Being stuck on Columbia Gateway Dr today is the most defeated one could possibly feel. There's no way out! #columbiamd #hocomd

@macsmom: @mduren it made me realize how limited ingress/egress is there.

@mduren: @macsmom usually it's not a problem. but when there's a jam, it can get bad real quick.

Details of the accident itself can be found here. My concern is whether this event revealed a flaw in the whole Gateway layout: limited egress. A serious study, of course, would require maps, historical data, traffic reports, possibly an ongoing traffic study. But as an armchair student of local events, I look at this and wonder: if there were a catastrophic event and mass evacuation were necessary, would the people who work in Gateway be at risk?

Bluntly put: if everyone tried to get out at once, what would happen?

I don't know. But I think it's a question worth asking.

P.S. Here's a visual reference to jog your memory of the location.