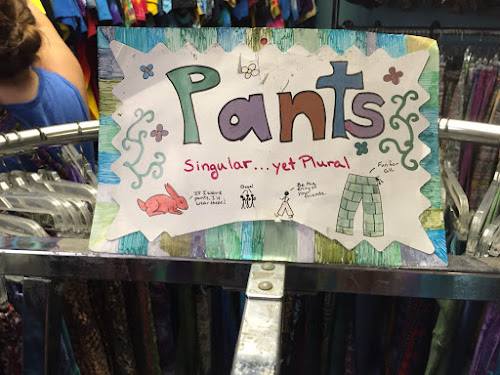 It made me smile. It was worth the time to stop and take a picture because of its playfulness and gentle humor. I love language. I love playing around with language. This was a picture perfect example.

I am a big fan of the phrase e pluribus unum, originally selected to be a part of the Great Seal of the United States. The meaning of these words--out of many, one--is described here with the claim that:

This shows that America was originally likened to a bouquet of different flowers, where unity and individuality coexisted – as opposed to a "melting pot" that blended everyone together.

Yes, when I saw this light-hearted sign in the hippie/tie-dye shop while I was on vacation I went from "singular, yet plural" to "out of many, one". That's just how my brain works. And it's a great concept.

Here in Columbia and Howard County we represent many different ways of life, show allegiance to specific communities and neighborhoods, identify with East/West, Suburban/Rural, look at life through different politically-colored lenses. We're singular as members of the larger community known as Howard County. We're plural in all the many ways we express that.

Photographs from our recent Fourth of July celebration at the Lakefront paint a pretty picture of what that looks like. Comments on articles in the Howard County Times on Merriweather, board appointments, and nutritional guidelines do not.

It is all too easy to say, "My people are the best people, our ideas are the best ideas, and we spit on the rest of you."

It has been a rough week here in hocomd. Let's hope that this week brings better things: actions and decisions informed by our best aspirations and productive conversations that don't resort to expectoration.