Out on the Dance Floor 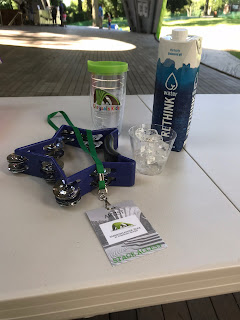 Party with preschoolers in the morning, recover with ibuprofen in the afternoon. A day well spent.

Something I have noticed since beginning these dance parties at the Chrysalis is the composition of those in attendance. Moms with kids are probably the majority, and there have been a smattering of grandmas, but I have been surprised at the number of dads. The service dog was the icing on the cake.

My own dad admitted years later that he never really knew what to do with his three daughters during their younger years. I got to know him best when I was in college and he was in the last years of his life due to COPD/emphysema. I don’t have any firm memories of him from my “preschool” years.

That is why it brings me such joy to see all these dads singing and dancing with their kids. They laugh, they improvise new games with the hands on materials, they proudly take photos and video as their children are enjoying themselves.

Now, there are still a few dads standing at the edges of the stage, drinking coffee and chatting with other dads while the moms are “doing the mom thing.” They don’t quite know what to do with themselves. They haven’t quite figured out how they fit in. I’m still glad they came and I hope that next time they’ll step out of their comfort zones and shake a leg with the rest of us.