To See and Be Seen

So, as Pride month comes to and, I have a few things to say about representation. You may remember that I once wrote about astronaut Sally Ride’s famous quote, “You can’t be what you can’t see.” 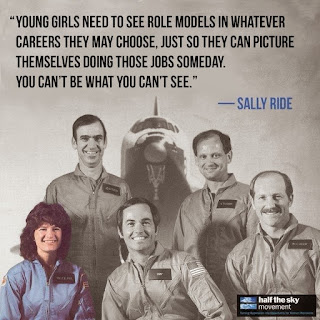 As I walked around and talked to folks at the recent HoCo Pride Kick-Off event, I began to think about what a loss it is for the community that the enthusiasm for the new HoCo Forward slate swept away the only openly gay candidate, Bob Ford.

Bob ran a positive campaign and turned up in my social media feed often. He took the responsibilities of the Democratic Central Committee seriously. He even went after and received notable endorsements. I enjoyed speaking with him at the (few) political events I’ve attended. He already had a proven record of service locally. I felt sure he would be elected.

He wasn’t. Was it merely the enthusiasm for the new HoCo Forward Slate? Was there possibly any rejection of his willingness to be an openly gay candidate? I don’t know.

But as I wandered around the joyful Pride event on Thursday night, I thought how sad it is that the Democratic Party couldn’t elect an openly gay man to Central Committee. All around me I saw LGBTQIA teens, young adults, same-sex parents with their children...

As happy as I am for some of my friends who were elected to Central Committee, I can’t  help but feel that something has been lost. Representation is important. And it’s especially crucial for Democrats if we want people to believe that we are inclusive, welcoming, affirming and all that good stuff.

I observed some of our newly-elected candidates/nominees clustered together in a tight little circle at the Pride event. I had hoped to say hello but couldn’t find a way to break in to the group. It was (happily) a crowded event and perhaps that’s the only way they could hear each other in all the hubbub. But it felt exclusive in a cliquey kind of way. They may have been at the event but they weren’t of it.

I chatted with Bob and his husband Steve on Thursday night. I asked if I could write about this. It seemed to me that Bob almost winced.

“Yeah, you can...” his voice trailed off. “But how can it make any difference?”

These word stayed with me as I left the event that evening. Bob Ford, hard-working, committed, not showy or highly competitive, put himself out there in complete honesty about who he is. He just wanted to make a difference. And, despite the outcome of the election, he is still committed to working to support the local Democratic community.

LGBTQIA representation is important. You can’t be what you can’t see.