Scanning the news for stories of local interest this morning, I noticed this cartoon by Brian Gordon from FowlLanguageComics: 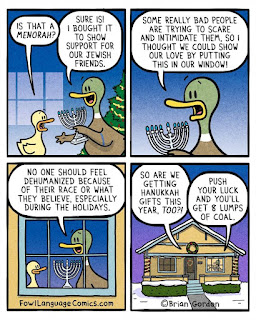 It ran with this explainer:

Today's comic was inspired by a friend whose young daughter was frightened to decorate for Hanukkah after the horrible Pittsburgh synagogue shooting. So I'm decorating (and posting this cartoon) in solidarity.

This, by itself, is not a local story. But we can make it one.

We know that Jewish students have experienced anti-Semitic harassment at school  here in Howard County. And we know that the Pittsburgh shooting cast a very long shadow over Jewish people everywhere in this country. That means right here where we live.The changing political landscape has allowed religious and racial intolerance to slip out of the darkness and say its ugly name with frightening frequency.

That’s what makes this a local story.

I don’t know if putting a menorah in the window is good enough. Some folks felt that putting those “Hate Has No Home Here” signs in the front yard was laughable without concrete action. They have a point there. But where do we begin?

The first night of Hanukkah is this Sunday. What if it were possible for each of us to do one thing for each night that made it easier, safer, and more warmly welcomed for our Jewish neighbors in Columbia and Howard County? What would that look like?