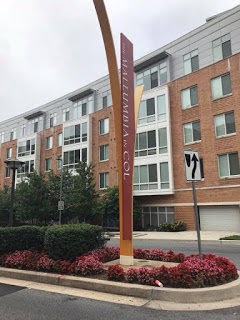 I couldn’t help thinking of this image when the internet threw this one at me recently. 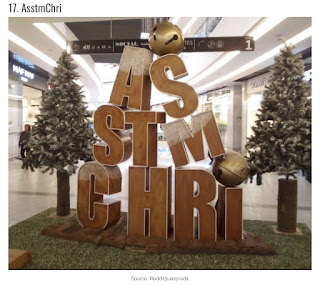 This sign is probably meant to be read from bottom to top, but it just reads as a bunch of gibberish. Did they have something against a plain old Christmas tree? Why get creative? It could also be that the letters were piled up at random.

The first photo shows what I believe was probably a goof, although it could have been a prank. If anyone knows the truth, send it my way! But the second picture, though equally amusing/puzzling, came about for a different reason. The caption touches on the cause.

That’s it in a nutshell. Somebody got creative. They had a concept but they hadn’t envisioned the end result as clearly as they might have. Oops.

Still, this isn’t an issue of enormous magnitude. It’s a pretty big jump from scratching your head at the outcome to outright challenging the creative process.

Why, indeed? Even though Columbia was itself founded in a multi-pronged, multi-faceted explosion of creative thought, breathtaking in its audacity, still we see pushback against present-day creativity.
I wasn’t around to bear witness, but there must have been at least a few things that were a part of the Pioneer years in Columbia that some HoCo folks didn’t like, or thought were silly, or gaudy, or a bad idea. And there were probably a few things that didn’t work out as expected, despite the best intentions of their creators. I’d say that’s okay.

Because creativity is a part of creation. And creation is life. And life means dreaming, and trying, and stumbling, and reaching for a better way all the time. It may, from time to time, be messy. Like the odd sign for the Mallumbia in Col or a jumbled Christmas greeting.

I’m good with that. I think it’s all a part of being alive, something that I hope Columbia will be for a long time to come.