An ongoing theme of this blog is the pull that exists between the generation in Columbia known as the Pioneers, and those who are engaging in community life in the present day. Certainly yesterday’s post touched on that tension.

But wait just a minute, Columbia. There are some folks in Howard County that have some feelings about that. 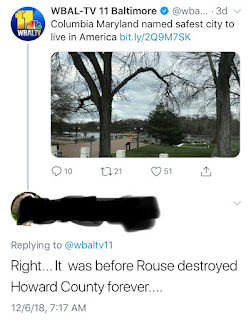 I’ll be frank. A comment like this is a reaction to more than a tweet from WBAL. It’s a reaction to the election of Howard County’s first African American County Executive, a resident of Columbia.

I think that, given the current political climate, we are going to see more comments like these. The tone set at the national level enables them. The comments about Columbia “attracting a bad element” and dog whistles about Columbia becoming more “urban” have racism baked right in. Howard County was ours, they say, and Rouse came and gave it to...”those people.”

As entrenched as Columbia’s first generation may have become in their life experiences of all that was revolutionary and aspirational about Rouse’s vision, I think it’s wise to remember that there are still folks in HoCo who harbor ill will towards the whole thing. They want their Howard County back. And these aren’t just people who were alive at the time; this discontent has simmered down to successive generations.

And there are some who were fine espousing a “One Howard” philosophy as long as a white man was in charge. Once the person in the leadership role is black, they feel uncomfortable and disenfranchised. As the current saying goes:

When you’re accustomed to privilege, equality feels like oppression.

So it appears that when people have the power, they very often don’t want to give it up. If you think it all belongs to you, look over your shoulder. There’s always going to be someone who thinks it belonged to them.

My advice: if you want to build community, look around you and seek opportunities to make connections. You might have to let go of some of what you are holding on to in order to reach out.  Perhaps giving of your power and privilege freely will reduce the fear that someone’s coming to take it from you.

We are going to have to face this, one way or another.