Don’t complain. Do something! 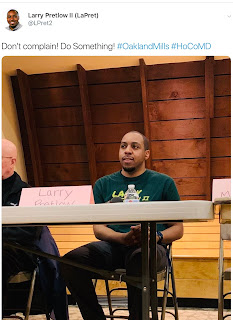 It’s as simple as that. Larry Pretlow, running for a second term on the Oakland Mills Village Board, is telling us that actions speak louder than words.

There’s just one thing,  His own words are extremely problematic. When I wrote this post without naming him, I guess I was just complaining. Now I want to do something.

I want to shine a light on Larry Pretlow.

While serving as a member of the OMCA, Mr. Pretlow has also declared himself a candidate for County Council. The way he uses his position as an OMCA Board Member Clearly demonstrates a conflict of interest  And his public statements on this have been startling:

Opel Jones is the biggest jerk on the face of the earth.
Man, I can't wait to KICK HIS ASS! This is why we don't need OPEL JONES
MATHEMATICS IN DISTRICT 2 OR ON THE COUNTY COUNCIL!

How can he hope to work collaboratively and represent the Village of Oakland Mills while he is using his position purely as a springboard to self-promotion? (Not to mention making threats of physical violence to public officials.)

In addition, Mr. Pretlow’s views on women are deeply troubling. You may recall that he questioned the fitness of his primary opponent, Jen Terrasa, based on his distaste for her physical appearance.

It gets worse. In arguments on Twitter he addresses women who disagree with him as follows:

Don’t you have a vagina to be more responsible with?
I guess your reckless uterus is tweeting for you.
...you reckless hens
You sound like a damn fool you foolish black woman.

Overall, Mr. Pretlow’s online interactions show that he is quick to anger and his responses often suggest physical violence. (See Opel Jones, above.) That’s why I wasn’t surprised when he
shared a history of physical violence towards women. 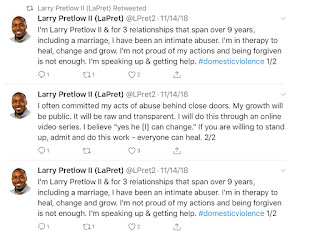 Frankly, Mr, Pretlow is so busy running for County Council, getting help for intimate partner violence (I hope), and insulting anyone who disagrees with him - - I don’t see he has time to serve on the Oakland Mills Village Board.

Now that you’ve read this, don’t complain. Do something. DO NOT vote to return Mr. Pretlow to the Board. His continued presence is a toxic force to contend with, not a help and support to his neighbors.