Good morning. I’m here today to talk to you about glee. No, not this glee. And not the glee with which the reindeer shouted out to Rudolph. I’m here to address an accusation made by a prominent local Republican this week. His words came in response to an acknowledgement of the late Elijah Cummings after the vote on the articles of impeachment.

What is sad is that you are hiding your glee behind the death of a congressman.

There was accompanying pontification on how local Democrats’ demeanor was unseemly. They were clearly expressing delight when they should have been reflecting a somber mood.

The delight is very telling. Sad.

I could not disagree more.

Do not tell me that I should feel that the vote on articles of impeachment is “a sad day for our country.”  The sad day for our country was when the current office holder was installed in spite of losing the popular vote and through the machinations of a party so eager to win that they accepted help from groups whose aim is to break down and destroy our democratic process.

That was the sad day. Wednesday was a day of reckoning. Wednesday the nation fought back.

I’m going to share a photograph which has been making the rounds on social media lately. 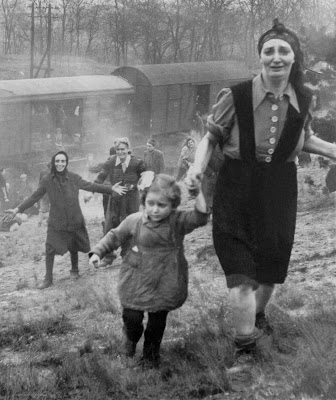 These women have just learned that they are being freed and will not be continuing on to Nazi death camps. Examine their facial expressions. Their emotions are understandably complex but their joy is clear. The unspeakable horrors they were facing have now been smashed by their liberation. It is not a sad day. No one will fault them for their delight.

Right now we have a president and an unwavering cadre of legislative supporters who separate parents and children, who place people in camps, who allow human beings to suffer and die alone without adequate medical care. He uses the powers of his office to gut laws that protect the environment, LGBTQ Rights, safe food handling. He takes food benefits from hungry families and children. He fosters an environment of hatred and intolerance against anyone who is different or who dares to oppose him. He pressures other nations to perform tasks solely for his personal benefit.

The day that the congress of the United States holds this President responsible for his actions against the nation is not a sad one. It is a triumph of the very process the founders laid out to protect the survival of our democracy. If this vote opens a door to stopping the pain that this administration is causing?

That would be a very happy day.

You’re darn right I’m gleeful. Who would not be if it meant that there might be a possibility that this horrific suffering might be ended? How could you not be joyful? We the People have the power to push back and censure tyrants and insist that our elected officials stand for something more than the worship of riches and the callous promotion of human suffering.

You can’t shame me. I’ll take your glee and raise it one. I’m proud.