Since the Governor has brought back his “schools shouldn’t have local control of their calendars” bill, its only fair that I bring back what I wrote about it last time. Mr. Hogan describes it as “common sense legislation.” Before we watch his rerun, let’s take a trip down memory lane to see what happened last time he used his authority to force this issue. 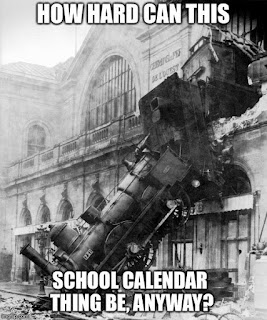 Oh, and let’s not forget Maryland weather, which looks at this entire scenario and says, “hold my beer.”

This just feels like a classic example of what happens when men come in saying, “I’m going to fix this for you; it’s no big deal” and then proceed wreck
the whole thing. And then, while surveying all the broken pieces, they say, “Hey, maybe this had more moving parts than we thought...”

I’ll be taking a fresh look at this tomorrow,