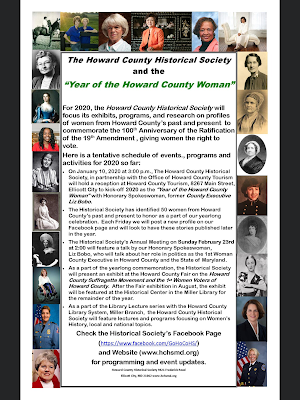 I must admit that I was wondering what put them in mind of making this particular year “the year of the Howard County Woman.” Thank goodness it’s right there in the promotional piece above:

...to commemorate the 100th anniversary of the ratification of the 19th amendment, giving women the right to vote.

Ahem. Not all women. That should read, “giving white women the right to vote.”

I’m looking forward to seeing who they have chosen to feature and learning more about women who have shaped Howard County. You can learn more about the Historical Society and what they are up to at their website. 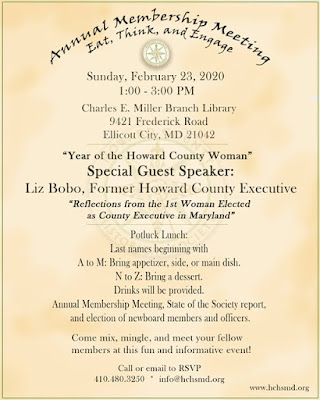 You can see from the notice above that there will be a potluck luncheon.  Here is where I am going to give a bit of completely unsolicited advice. If this is truly “The Year if the Howard County Woman” then the men should be bringing the covered dishes. And doing the serving, and cleaning up.

Does that seem like an awful lot to ask? I don’t see why. Women in Howard County (and everywhere else) have been doing it for generations and no one thought it strange.