Seen at the newly renovated Round House Theater in Bethesda: 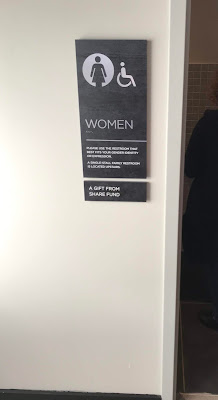 As I waited in line to use the restroom at intermission, an older woman gestured to the sign and said to her companion, “It’s all so confusing, isn’t it?”

Please use the restroom that best fits your gender identity or expression. A single-stall family restroom is located upstairs.

I didn’t say anything. It wasn’t my conversation. She looked to be in her late seventies and her tone was genuinely puzzled, not judgmental or mean-spirited. She saw it, she noted it, she moved on.

I truly believe that we will move to a point where this is completely a non-issue and the right to use a bathroom will become solely an issue for the person who needs to go. Someday. Maybe not tomorrow, but in my lifetime. However, it will take many allies standing up for the rights of others to make that a reality.

During the last election campaign for the Board of Education, one candidate stood out in her rejection of fair bathroom access for trans students. She was defeated. But she had supporters in the community and they are still out there. Her loss very likely did not change their attitudes.

I say this now because I worry that current BOE candidates could possibly have similar attitudes but may, as the result of this former candidate’s experience, wish to fly under the radar and keep those views quiet during the campaign. Don’t let them.

No matter where you live in Howard County, make sure you know where candidates stand on this issue. Comfortable and safe bathroom access for trans students is a civil rights issue. It’s an education access issue. If a candidate isn’t willing to champion the civil rights of all students, they don’t belong on the Board of Education.

There are many issues to consider. Don’t let this one fall through the cracks.
Posted by Julia A. McCready at 3:01 AM