Here we go again. Governor Hogan’s commitment to interfere with (usurp?) local control of school calendars continues into a new year. It now looks like this. 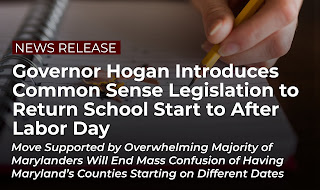 For those of us who remember living through this the last time, the actual mass confusion was what happened when the Governor dictated opening and closing dates without fully comprehending how the whole school calendar thing works. (See yesterday’s post.)

But today I want to focus on a different aspect of this issue which has troubled me for quite some time. The way that Governor Hogan frames his personal priorities here is a bald-faced attempt to delegitimize the authority of the General Assembly. I find that dishonorable and dangerous.

Both Mr. Hogan and Mr. Franchot, whose brainchild this initiative was originally, have engaged in media campaigns to spread the word that their plan is supported by “overwhelming majority of Marylanders”. I don’t believe that any of the surveys or polling they have done are comprehensive enough to provide this kind of incontrovertible evidence. I’m pretty sure that the kind of folks who are most negatively impacted by the later start dates are not the ones included in their data.

Apparently a little known fact in the Governor's Mansion: both the Governor and members of the General Assembly are elected by popular vote. They all have a legitimate reason to be doing the work they do. And it’s actually more likely that legislators are going to be hearing from and responding to their constituents on a regular basis. After all, when you have a concern about a particular issue, do you reach out to the Governor or your legislator?  On the whole, legislators cast their votes with an eye to representing their constituents. But, to hear Mr. Hogan talk about it, the Maryland General Assembly is some kind of unelected body has no contact with citizens and takes no action in response to their needs.

This is nonsense. It is a patently dishonest framing of the issue. And it is a kind of executive overreach that threatens to undermine actual representative democracy in the State of Maryland.

The Governor is free to disagree with the State Legislature on this issue. He does not have the right to suggest that the entire State Legislature is somehow illegally occupying the statehouse without any charge or authority. How does he think they got there? The Tooth Fairy?

Truth be told, he knows. He just hopes that his base doesn’t and can be moved by the notion that only he knows and cares for them. Yes, it’s paternalistic, and a little bit creepy.

I am not saying that the State Legislature is always perfect. But they are an elected body. Elected by us. Their members are there to make the best choices they can for their constituents and the state as a whole. If their constituents do not feel adequately represented, they will be voted out. Attempting to compromise the validity of their work is more than just a cheap shot.

It’s an insult to to the citizens of Maryland and an attack on a form of government whose roots can be traced back to before the American Revolution.