A Monument to Nowhere

One year ago came the first local glimpse of the kinetic sculpture we know now to be Azlon. Here is the photo shared briefly on Columbia Patch before it abruptly disappeared. (I still don’t know the backstory on that.) 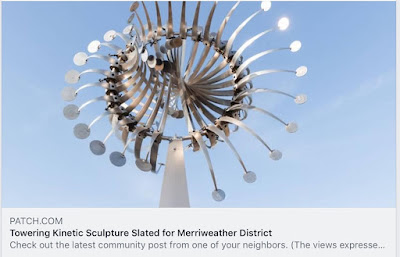 Of course, now this “towering kinetic sculpture” has been installed as an artistic centerpiece to Howard Hughes Merriweather District area of downtown development. Here is what I know:

It’s big.
It moves.
It squeaks.
I’ve never seen it.

That’s right. I’ve never figured out how to get over there. And I have had no particular reason to be “in that part of town.” Now, of course, I’m not going anywhere. But I’ve been thinking about it nonetheless.

One of the things I have been told over the years in my quest to understand Columbia history is that Rouse’s original plans were derailed by a recession in the mid-1970’s. Some things never got finished. Think of the area called the Crescent where the new Merriweather District is forming. It was always meant to be developed but got sidelined in a tanking economy.

So, what now? The current pandemic is surely taking a toll on the economy which will take quite some time to move beyond. We don’t even know how severe the consequences will be at this point. What does that mean for progress in Downtown Development in the Merriweather District and beyond? Could a national/global recession significantly alter the plans or even bring them to a halt?

Could Azlon end up, at least for a while, as a monument to nowhere?

And could Howard Hughes sustain enough damage that it emerges as a company more suited to developing garden apartments and Walmarts?

I do not wish this on them. Or us. But this global crisis is going to have consequences. I imagine that big corporations have contingency plans. I’d like to know what the contingency plan for Downtown Columbia development is.

“So, if there’s an economic crisis while we’re developing the Merriweather District, this is how we will respond.”

Yeah. That. I’d like to know. Because, no matter how breathtaking and innovative your plans, sometimes life comes along and knocks you flat. Just like what happened to Jim Rouse and the Rouse Company in the 70’s. Sometimes the road gets a whole lot longer than you expected.

Do we have a plan for that?