Okay, I’ll admit it. It was the lede that made me take a second look.

Highland and Clarksville project an air of bucolic, genteel ease that only money can provide. But beneath their serene facade a revolutionary fervor has burned.

It’s certainly some of the most exciting language I’ve read in the Howard County Times in many a year. 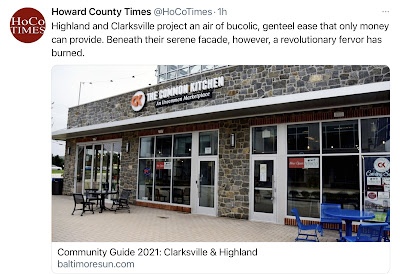 I hope I can be forgiven for assuming that the sentences had something to do with the photograph. It stands to reason that there’d be a connection, doesn’t it? So when I clicked to read the article I expected to read about how a revolutionary fervor burned beneath the serene facade of The Common Kitchen. I wasn’t sure if I should laugh or be concerned.

How little I knew.

The piece, by Mary Carole McCauley, is a part of a larger series of articles by the Howard County Times entitled “Community Guide 2021”. They seem to be under the Howard Magazine umbrella. The revolutionary fervor in question refers to actual Revolutionary War history of the area. The photograph is unrelated to to the text.

I was perhaps a little disappointed.

I thought I was in for a description of how bringing together foods from many cultures under one roof gave residents in an affluent suburban area an opportunity to make connections with people unlike themselves. A bit revolutionary for River Hill/Clarksville, yes? Who knows how many people’s worlds have been broadened by new flavors and friendly conversations?

Speaking of which, you can do a good turn for some of those friendly food vendors by casting a vote in the Baltimore Magazine’s “Best of” Reader’s Poll:

We're getting noticed and we're NOT going to be shy about it. PLEASE VOTE!! The Common Kitchen and several of our vendors including Koshary-by-MISTEKA, Anh-mazing Banh Mi, and Blowfish Poke, just to name a few have been nominated by Baltimore Magazine's Best of Reader's Poll. Please go and vote and help our little-kitchen-that-could get noticed.

What will you do to be revolutionary today?