I have long indulged myself in fantasy concepts for local landmarks. Some examples: redoing the Columbia Flier building as an HGTV-esque Extreme Home and living there, redeveloping the Wilde Lake Village Center as “children's bithday party central” complete with bouncy castles,, transforming the Wilde Lake Village Center into a History of Columbia theme park…well, you get the idea. I just like brainstorming and sometimes my ideas lean a little on the wacky side.

That’s why I immediately recognized a kindred spirit in the writer of this tweet:

Move the Bowie Baysox to Howard County and introduce the world to the Columbia Crabs. Replace the dumbest parts of the Mall with a stadium. Who says no? They could keep like half the dang mall. 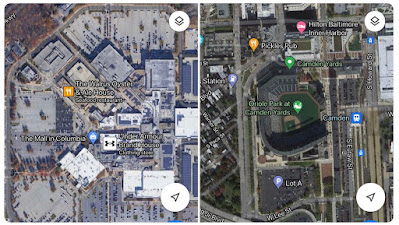 Well! That’s certainly an idea I had never thought of. I’m not particularly a sports fan, though I wouldn’t want to prevent others from enjoying them. In contemplating this suggestion I had two questions:

Remember, this is not a serious proposal from County government. This is a (light-hearted, I think) suggestion from a sports fan who prefers the Baysox to malls. So, in that same spirit, do you think that would be fun? Can you imagine a world in which that would work? Would tailgating in the Mall parking lots become a thing?
I’ve seen various ideas in the past for what might happen with the Mall real estate if the entire mall concept eventually becomes obsolete. I’m not sure I’ve ever seen a stadium proposed.
A mall-stadium hybrid. Hmm. Not sure I can quite wrap my brain around that but I’m curious to hear what my readers think. Is a sports venue the Next Big Thing that the New American City ought to have? Or are we just fine without one?
Come back tomorrow when I reveal how commenters responded to this suggestion. It isn’t what you might expect.
Posted by Julia A. McCready at 3:01 AM