Order, Chaos, and the Big Plant

Yesterday’s sermon at church centered around gardening symbolism and one part of it really struck me. Our pastor described two kinds of gardeners: one that plannned everything out carefully and neatly, and the other that just threw everything out there and hoped for the best. This second method she called “chaos gardening.”

That would be me. I’m continually amazed by things that turn up that I don’t even remember planting. This little guy, for instance: 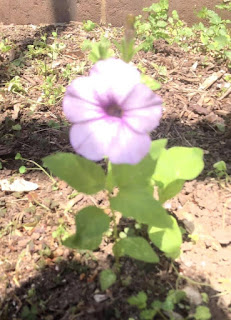 As an example of this kind of gardening Rev’d Groen described a plant that turned up in her yard which sprang up to impressive heights almost overnight. Her neighbors took a dim view of this thing. She herself had no problem with it as it even gave her a bit of shade on her front porch. As she described it a light dawned for me. I knew that plant. 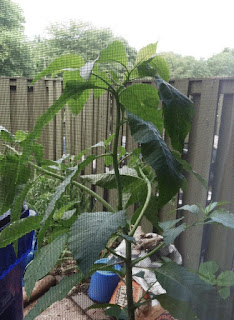 Yup, we had one a few summers back that threatened to take over our back patio. At the time my friends informed me that it was pokeweed. Harmless, it would produce purple berries that the birds liked. On the basis of that I thought we should leave it alone but my husband (like our pastor’s neighbors) found something alarming about it.

I took it out.

I’m definitely a chaos gardener, possibly because I was not raised by gardeners of the other sort. Or perhaps because there is something deep inside me that resists neat and careful planning. It could be some of both. My mother-in-law's garden in Dickeyville is a marvel. This year in particular she has invested a good deal of herself in making it “just so.” I think it may be a way of emerging from the pandemic by giving herself and her neighbors the joy and beauty of living things.

I think there’s probably a sermon in that, too.

I know that this isn’t particularly a local topic post, but the concept intrigued me. Are you a chaos gardener? A more traditional one? Or maybe you want nothing to do with gardening whatsoever? In the interests of trying to take a stab at making this a “community” post - -

Do you think these sorts of personality types come into play when we get together to work on community issues? I have a few ideas but I want to hear what you think.