Reporters wrote about it.

And the signers of the petition reached 500.

Every voice, both big and small, was valuable. All kinds of Howard County citizens spoke out. Politicians from both parties expressed shared goals.

But one voice, unbeknownst to most of us, was a quiet one. Not just talking, I would guess, but also listening, negotiating, offering possible solutions.

Yesterday we learned that quiet voice was Councilman Calvin Ball, who had been working behind the scenes to broker a solution that would bring about Sheriff Fitzgerald's resignation. Here is the letter shared from his office Tuesday afternoon. 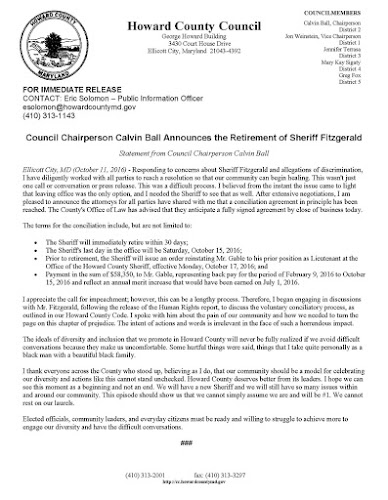 The unexpected conclusion to this local crisis brought to mind one of Aesop's fables.

The North Wind and The Sun

The North Wind boasted of great strength. The Sun argued that there was great power in gentleness.

"We shall have a contest," said the Sun.

Far below, a man traveled a winding road. He was wearing a warm winter coat.

"As a test of strength," said the Sun, "Let us see which of us can take the coat off of that man."

"It will be quite simple for me to force him to remove his coat," bragged the Wind.

The Wind blew so hard, the birds clung to the trees. The world was filled with dust and leaves. But the harder the wind blew down the road, the tighter the shivering man clung to his coat.

Then, the Sun came out from behind a cloud. Sun warmed the air and the frosty ground. The man on the road unbuttoned his coat.

Soon the man felt so hot, he took off his coat and sat down in a shady spot.

"How did you do that?" said the Wind.

"It was easy," said the Sun, "I lit the day. Through gentleness I got my way."

It has been a very rough time here in Howard County, especially for those of us who had discovered we had voted someone whose behavior went against the grain of what we value most in our community: respect for others, valuing differences, looking for the best in those around us. The news from the Human Rights Commission report stung.

We wanted to do something. We wanted someone in power to do something swiftly, dramatically, perhaps. Sometimes we imagine justice swooping down like a superhero to right the wrongs that we cannot.

Yesterday was a reminder that justice isn't always going to look like that. Sometimes patience and persistence win the day.