Saturday's adventure took me out of the Bubble to Arlington, Virginia to a place called the Iota Club and Café. 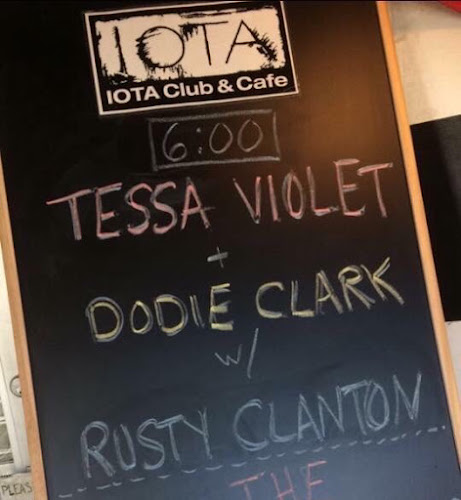 My daughter is a huge fan of Dodie Clark, a YouTuber singer/songwriter from England who is presently touring the U.S. with fellow YouTubers Rusty Clanton and Tessa Violet from Nashville. There weren't any shows scheduled near us. She was mightily disappointed. And then, on Thursday, an extra show was added.

"It's only about an hour away!"

So we went. Somewhere between my hatred of multiple variables and my deep gut feeling that this is what a Cool Mom would do, I found the emotional wherewithal to have an adventure with my teen-aged daughter. It was a beautiful day for a drive--sunny, blue skies--although the winds buffeted us a bit. We set the MapQuest app and off we went.

The Iota Club and Café is in a bustling neighborhood of Arlington that boasts a Whole Foods, a Crate and Barrel, Pottery Barn, and plenty of other shops and restaurants. When we arrived, around four-fifteen, the area was filled with people. We easily found a parking garage and had about a block walk to the venue. As we waited for a light to change we were behind a little girl and her mother who were talking about going to "the Blue Playground."

Is this where we are headed with Columbia? I thought. It was clear that it would be easy to park once and walk to shops, restaurants, and, in our case, a musical event. There were also on-street two-hour parking spots, as well as some parking lots for certain businesses. So people who wanted to drive had some options. I didn't notice a lot of bikers but we did see several bike-share stations in the area. It's also two and a half blocks from a Metro station.

The club itself was probably the best place for me, as a suburban mom with trepidation about venturing out my comfort zone, to have my first club experience. They have a restaurant side with about a dozen tables, a bar along the back, and the concert space is separated by a curtain to give the dining room a sense of being in a different room.

We got there early enough to have dinner. The food was quite good and reasonably priced. The service was excellent. At one hour before the show they collected money from those that were there for the show, and stamped hands. The Iota is normally a 21 and up venue. This event was an all-ages show, so they were scrupulously stamping adult hands vs. underage hands.

Oh, and one more thing. The bathrooms were immaculate. And they had a staff member planted at the hallway to the bathrooms which I thought was a good plan. He was just doing a crossword on his laptop but I think he was probably there to prevent possible shenanigans. (But I'm a mom, that's just how I think.)

It was a very, very good show. I have no idea how teens stand for three hours. I was glad to be on the restaurant side at a table, being a mom. I could probably write a separate post just about the music and the audience dynamics. It was a pretty amazing experience.

As we headed back to our car I got to thinking about the talk I've heard about transforming Columbia's Tomato Palace into a music venue. At the time I couldn't visualize what that meant. Now I can. And I'm 100 per cent in support of that. Especially if they incorporate all ages shows into the mix, as Iota did. Wouldn't it be great if our teens could do more at the Lakefront besides getting their pictures taken for Prom?

So maybe now I'm the Cool Mom. At least for a few days, anyway. And I caught a glimpse of something that could make Columbia cooler, too.