Voting With Your Feet

Once upon a time there was an exhorbitant tax on British tea, and the colonists would have none of it. They stopped buying it. We tend to remember very public act of dumping some in the harbor. But it was much more than that: people simply stopped buying and drinking British tea. It was an act of protest against rule from afar that was based on taxation, but no representation.

Boycotts as a means of political expression go way back in history. Certainly I remember several from my childhood and young adult years: boycotting California table grapes to support farm workers, boycotting Nestle products to protest unethical promotion of baby formula. Communicating displeasure with a company by "voting with your feet" has been known to bring about positive change.

That brings me to the present day, and the local gas stations posting the Janet Siddiqui BOE signs. I just can't bring myself to patronize those stations. The owners are certainly free to post those signs but, when I look at them and contemplate the outrageous lack of leadership and respect displayed by Dr. Siddiqui towards our community, I just can't spend my money there.

This is a personal decision. No one suggested it to me. And I haven't engaged in any organized recruitment to boycott these stations. It's my own protest. You are welcome to think it is silly or ineffective. But it's my choice.

Lisa Markovitz of the People's Voice heard rumblings on social media of other people taking about a similar boycott. Out of a sense of professional courtesy, she sent the following letter to affected businesses. 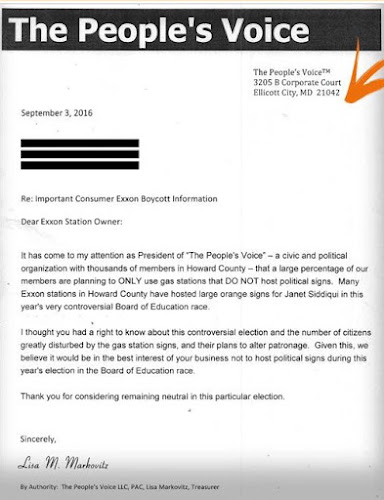 Yesterday Janet Siddiqui's team accused Ms. Markovitz of bullying small businesses. They suggested that what you read above was part of an organized boycott of businesses. 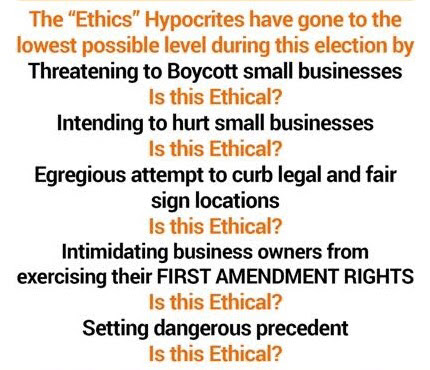 All you have to do is read Ms. Markovitz' letter to know that these accusations are untrue. There are no threats. There is no organized boycott. There is no suppression of First Amendment rights. Her letter explains the situation in an effort to allow these business owners to make an informed choice.

But someone on the Siddiqui campaign has terrible reading comprehension skills. That doesn't bode well for someone who wants to serve on the Board of Education. A simple compare and contrast assignment from high school would put this nonsense to rest.

Citizens in Howard County are free to spend their money as they choose. If they drive by gas stations displaying the orange sign, they are not bullying small business owners. Were the original colonists bullying the British crown? Good grief. It's hard to understand this move by Dr. Siddiqui when there are actual issues in this campaign that Howard County citizens would like to see addressed.

Perhaps the reason Dr. Siddiqui spends all her time accusing others and deleting comments that don't make her look good is because she is unable to address those key issues. So she wants you to look somewhere else.

Well, that's a product you certainly aren't obliged to buy.