This political sign thing is getting out of hand in Howard County. Lisa Markovitz of The People's Voice posted this yesterday:

So, I was just now accosted by Nayab Siddiqui. Wow. I was driving near my home and noticed the mowers had come, and many signs were down. I pulled over on Frederick Road and put a sign for Mavis Ellis that was down in the grass, back up. It was obvious that it had been taken down by mowers and not put back up, as there was cut grass all around there.

As I put the sign back, Nayab appeared and was filming me. He demanded to know if I had permission to place the sign. I explained that I was putting a sign back up that was obviously taken down by a mower. He still demanded to know what other signs I have placed and whether or not I had permission, and stated that all Janet's signs are placed with permission, and asked me to stop putting signs in front of Janet's sign, even though, when I put the Mavis sign back from the mowers having placed it down, I put it at least 10 feet from Janet's sign.

Having someone pop in front of me and film me and make demands and ask questions was very rude and odd. I then took out my camera/phone because he told someone with him to remove the Mavis sign! So, they left it. Wow, just wow. So watch out, Nayab says you can't put signs back that mowers take down and don't put a sign anywhere near Janet's since, you know, only she has permission to put them on State and County easements? Really? He says they are all placed with permission but sorry, no one can give permission for those areas.

This behavior is more than "rude and odd", in my opinion. It smacks of the same harassment on display when Mr. Siddiqui thrust himself into the spotlight at last weekend's BOE Forum to make false accusations against Vicky Cutroneo. What on earth was he doing on the scene at precisely the same moment as Ms. Markovitz? Was he following her? Or did she somehow catch him in the act of removing signs?

It's hard to know. Either possibility is abhorrent. It's interesting to note that a driveby inspection of this location later in the evening showed that all signs were gone, save for the Siddiqui sign. Hmm...

And what about this? 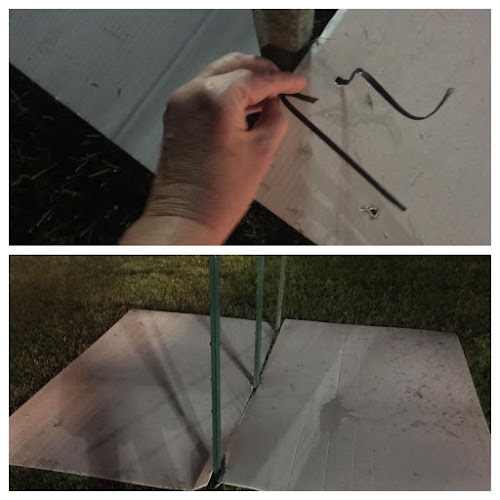 What you are seeing here is a sign for Vicky Cutroneo and Christina Delmont-Small that was deliberate cut down: scissors through the zip ties. Luckily that site has security cameras. The footage should be educational.
I attended the Columbia Villages BOE Forum last night at The Other Barn in Oakland Mills. An overarching theme throughout the evening was responsiveness, transparency, and accountability.
Someone needs to tell Nayab Siddiqui. He appears to think this election is about intimidation, harassment, and political signs.
Posted by Julia A. McCready at 3:40 AM