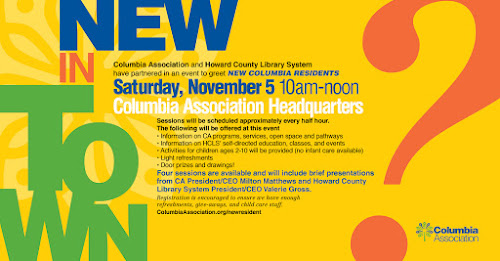 It's been a while since I've done a true HoCo Holler. This upcoming event definitely deserves a shout out. Columbia Association has teamed up with the Howard County Library to host a welcoming event. They are reaching out to new Columbia residents. I think that's awesome.

When you are new to Columbia, you don't automatically know about CA, or James Rouse, or Tot Lots or any of that stuff. I know that may be hard to believe to those of you who have been here forever. I'm convinced that the ongoing viability of Columbia rests in outreach to new residents. A kind of community evangelism, as it were.

The idea of partnering with the library is brilliant. It's a true Village Green/Town² kind of partnership. The library system is a part of so many interesting and successful partnerships in the county. Who wouldn't want to team up with them? I'm hoping that the library's involvement will extend the reach of this event and bring the word closer to new folks in town.

Here's the deal: this event can be a success only if new Columbia residents know about it. I'm guessing that Columbia Villages will be promoting this event, as well as Howard County Libraries. Knowing how good their outreach is, they'll probably get the word out in Columbia school newsletters, as well.

If you live in Columbia, do you have new/relatively new neighbors? Tell them about it. Coworkers? PTA colleagues? If they are new to Columbia, let them know. Tell them they are invited. And let them know where CA headquarters is. There's nothing worse than getting lost in Columbia, MD. Believe me, I know.

Oh, hey, and realtors who are selling Columbia homes--steer people in this direction, okay? It just might seal the deal.

So, a big HoCo Holler to the Columbia Association and the Howard County Libraries. Here's hoping your event on November 5th is a huge success.