That Song Was Our Friend

On an unseasonably warm October afternoon, under a white tent, with food and drink from Clyde's, the hometown crowd gathered for a singular shoutout to our hometown's best. The music that played in the background was music that I knew well enough to sing along to. The guests were friends, important people, elected officials, people I used to be friends with, and people with whom I have sparred and from whom I have retreated. People I wish I knew.

Such a world of people in just one gathering.

"Dennis had a knack for gathering people," said Denise Geiger. And gathered we were, sharing a beer and a story, a tear and a hug. Listening to memories, one more time, of a man who meant so much to us and to his community. Watching Democrats and Republicans take turns at the microphone with ease and good humor did my soul some good. It was not a day for points and posturing. It was a day when your big, crazy, diverse family decides they are going to get together and get along. Just this once.

Columbia and Howard County, Democrat and Republican, Downtown Development or not, Dennis drew us in. He shared his curiosity about the things that interested him. He enjoyed a good conversation and the opportunity to laugh. This place--Columbia and Howard County--is a better place purely because Dennis loved it, and because he invited us to see what he saw.

There is now a street in Columbia called Dennis Lane. Like the sound of the ocean in a seashell, or a pearl in a oyster, there is a place deep in the heart of Merriweather that's an echo of his beautiful life. And he won't mind if the music is too loud or the Chrysalis is too green. His sister told us yesterday that she thinks he'd like to have a bench, though.

Some of the streets in the Merriweather complex will be named after songs. Councilwoman Mary Kay Sigaty said that sometime in the future people will ask, "Dennis Lane-- what song is that from?" But we'll know, she said. That song was our friend. 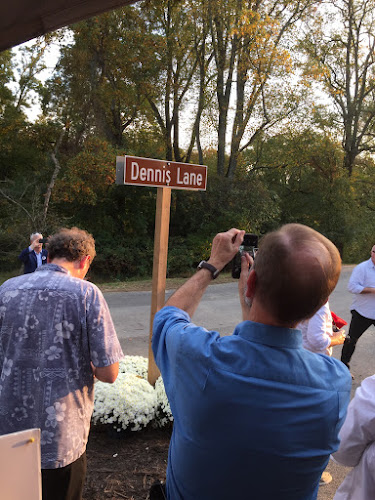